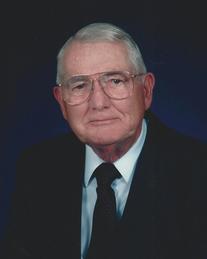 Andrew Wayne Monroe, 86, of Odon, passed away Tuesday, May 15, 2018 at Good Samaritan Hospital in Vincennes. He was born August 3, 1931, in Flat Rock, the son of Eugene and May (Oliver) Monroe. On October 28, 1956, he married his wife of nearly 62 years, Nina M. Haehl, and she survives. In addition to Nina, Andrew is survived by his sons, Andrew Monroe of Newberry, Philip Monroe of Waco, Texas, and Matthew Monroe and wife, Colleen, of Spokane, Washington; sister, Shirley Clapp of Shelbyville; brother, Carl Monroe and wife, Betty, of New Albany; five grandchildren; and several nieces and nephews. He was preceded in death by his parents; and sisters, Beverly Mann and Exene VanSickle. Andrew was a U.S. Navy veteran, serving during the Korean War. Known around Flat Rock in his youth as “Sonny”; “Andy” graduated from Flat Rock High School in 1949. Working for Cummins Diesel he got started in computers in the 1950’s. He retired as a systems analysis, having worked for Chrysler Automotive in Detroit and St. Louis, and later at Brown and Root in Houston, Texas. Andrew was of the Christian faith, and attended multiple churches through the years. He and his wife were married at the Zion United Church of Christ, where they were both members. He enjoyed woodworking and restoring machinery. Andrew relished time spent with his family, especially his grandchildren. Visitation will be from 12:30 to 1 p.m. Saturday, May 19, 2018 at Zion United Church of Christ, 7025 E 100N, Shelbyville. Funeral services will be at 1 p.m. Saturday at the church, with Pastor Brad Schultz officiating. Interment will be at Zion Cemetery in Shelby County. Services have been entrusted to Freeman Family Funeral Homes and Crematory, 819 S. Harrison St. in Shelbyville. Memorial contributions may be made to Zion United Church of Christ. Online condolences may be shared with Andrew’s family at www.freemfamilyfuneralhomes.com.
To order memorial trees or send flowers to the family in memory of Andrew Wayne Monroe, please visit our flower store.