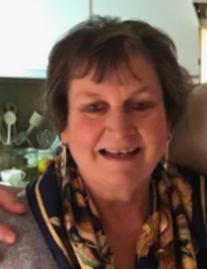 Angela Louise Margaret Davies, 59, of Shelbyville passed away Tuesday, January 7, 2020 at her home. She was born September 14, 1960, in Frankfort, Germany, the daughter of Siegfried and Ida Marie “Helga” (Ott) Bollheimer. On October 12, 1990, she married Curtis A. Davies, and he survives. In addition to Curtis, Angela is survived by her mother of Panama City Beach, Florida; and sons, Christopher Davies and Erich Davies, both of Shelbyville. She was preceded in death by her father. Angela graduated from Grosskrotzenburg Gymnasium High School, received her bachelors degree from the University of Mainz in Germany, and obtained her masters in English/German from Indiana University. She was a member of St. Joseph Catholic Church, where she was a cantor. She enjoyed sharing in the liturgical music ministry at St. Joseph with her family. Angela began her career as a Professor of German at Indiana University in Bloomington, after which she was the administrative assistant to the CEO of Knauf Insulation and Knauf family for 23 years. In 2011, Angela became the executive director of the Shelby County United Fund (SCUFFY). Prior to becoming the executive director, she was a member of the SCUFFY board of directors. She was also a member of Kappa Kappa Sigma. Angela was very community orientated. She enjoyed cooking, traveling, scrapbooking and sewing. Angela loved her family and the activities they shared. She also leaves behind her dog, Duke Ellington Davies; and cats, Benny Goodman Davies, Scrappy Davies and Chester Davies. A Mass of Christian Burial will be at 11:30 a.m. Saturday, January 11, 2020 at St. Joseph Catholic Church, 125 E. Broadway St. in Shelbyville, friends may gather from 9:30 to 11:30 a.m. at the church. Services have been entrusted to Freeman Family Funeral Homes and Crematory, 819 S. Harrison St. in Shelbyville. In lieu of flowers, memorial contributions may be made to SCUFFY, 126 N. Harrison St., Shelbyville, Indiana 46176. Online condolences may be shared with Angela’s family at www.freemanfamilyfuneralhomes.com.
To order memorial trees or send flowers to the family in memory of Angela Louise Margaret Davies, please visit our flower store.