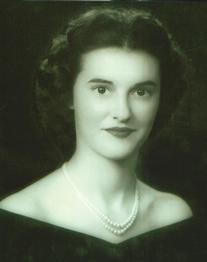 On December 27, 2020, Betty Lou (Andis) Everhart passed away peacefully at her home on the banks of Big Blue River near Morristown, Shelby County, Indiana. Mrs. Everhart was born on September 8, 1930, in Morristown, to Hazel Shirley (Pottorff) Andis and Charles Raymond Andis. Mrs. Everhart was a lifelong resident of Shelby County and always thought of Morristown as her home. After graduating as valedictorian from Morristown High School in 1948, she worked for Eli Lilly and Company in Indianapolis for five years. On July 20,1953, she married Harry Ralph Everhart, also of Morristown, at the United Methodist Church where she was a member and grew up in faith. Betty was dedicated to her family as a mother of six and loved her life as a farm wife. It was not always easy and filled with sacrifice, but also filled with love and a large extended family. She believed in making the best of what you were given. Until her passing, she was the rock of her family. Harry and Betty began farming near Freeport, Indiana in 1955 and their adventure as a farming family began with crops, hogs and cattle. She meticulously kept the books and records for the farm and beef operation. Raising and competitively showing Hereford cattle was a passion for Harry and Betty. They shared this with their children and made many friends across Indiana and the United States. She was a life-time member of the American Hereford Association and the American Angus Association. A life-long Democrat, Betty loved politics and public policy issues. She followed them throughout her life and believed in the power and privilege of voting. She enjoyed public service and worked a few years in the Shelby County Auditor’s Office. Mrs. Everhart is survived by her children, Katrina (Peter) Hall of Shelbyville, Bruce (Shoshanna) Everhart of Waldron, Christopher (Kim) Everhart of Arlington, Cynthia (Bradley) Mills of Fountaintown, Diana (David) Wiese of Manning, Iowa, and Timothy (Rhonda) Everhart of Arlington. She is survived by fourteen grandchildren, Matthew (Cassie) Hall of West Lafayette, Ashley Nicole “Nikki” (Noah) Wethington of Franklin, Tennessee, Blake (Ashley) Everhart of Middletown, Jordan (Brian) England of Waldron, Brandon (Jessie) Everhart and Josh (Bethany) Everhart both of Morristown, Jonathon (Stephanie) Everhart of Arlington, Sarah (Jon) Sparks of Greenfield, Kaitlyn and Ryan Mills of Fountaintown, and Chancelor (Kelsey) Wiese, Shayne Wiese and Trey Wiese of Manning, Iowa and Hannah Everhart of Morristown. She is also survived by twenty-one great-grandchildren, Liam and Logan Hall; Olivia, Nash and Finn Wethington; Brody, Hayden and Vivian Everhart; Ruby, Evan and Von England; Avery, Cora, Eliza and Coleman Everhart; Tessa Everhart; Annie and Myla Everhart and Emma Stephens; Charles and Ruth Sparks. She was preceded in death by her parents; husband, Harry on August 29, 2002; siblings and their spouses, Clyde (Marthena) Lindsay of Greenfield, Claude (Arbutus) Lindsay, Arthur (Mary) Lindsay and Anna (Jack) Wyatt, all of Knightstown, Freda (Lars) Cassell of Overland Park, KS, Lucille (Ernie) Wallace of Sarasota, Florida and great-grandson Abe Everhart. A private family visitation will be held on Saturday, January 2, 2021 at Freeman Family Funeral Homes and Crematory, Frazier Chapel, 124 E. North St. in Morristown with Reverend Chris Dourson officiating. The funeral service will be live streamed at 2 p.m. Saturday at www.facebook.com/freemanffh. Interment will be at Asbury Cemetery in Morristown. Online condolences may be shared with Betty’s family at ww.freemanfamilyfuneralhomes.com. Memorial contributions can be made to Our Hospice of South Central Indiana, 2626 E 17th Street, Columbus, IN 47201 or https://www.crh.org/service-centers/hospice/donate/hospice-in-memory-or-honor-of-donations.
To order memorial trees or send flowers to the family in memory of Betty Lou (Andis) Everhart, please visit our flower store.