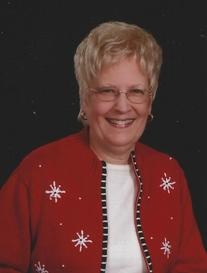 Beverly Means, 76, of Shelbyville, passed peacefully into her heavenly home Wednesday, September 11, 2019 at Our Hospice of South Central Indiana in Columbus. She was born December 1, 1942, in Indianapolis, the daughter of Herschell Robert Hall and Norma Louise (Grocox) Hall LaMee. She married Paul David Means on March 25, 1962, and he preceded her in death on June 17, 2014. Beverly is survived by her son, Brett Means and wife, Tammy; grandchildren, Lauren McNichol and husband, David, of Ridgefield, Washington, Luke Means of The US Air Force stationed at Shaw Air Force Base in Sumter, South Carolina, LeAnn and Lynnea Means, both of Mishawaka; and great-granddaughter, Noelle Rose McNichol. Also surviving are her sisters, Bonnie Hardesty and husband, Glen, and Lynda Denton and husband, Charles, both of Shelbyville, and Kaye Carlson and husband, Bryan, of Fort Wayne; and a brother, Robert Hall and wife, Mardell, of Granger. Other survivors include her sister-in-law, Shirley Means of Greensburg and many special cousins, nieces and nephews, the greats and great-greats, with all of whom she cherished those moments in time, she was blessed to share. Beverly is also preceded in death by her parents; step-father, John LaMee; step-mother, Phyllis Hall and her dear aunt, Thelma Conover. She graduated from Shelbyville High School in 1961, before working approximately a year for Glasson Chevrolet, a long ago fixture on North Harrison Street. Thereafter, she was employed for two years in the engineering department of the Public Service Commission in the State Office Building in Indianapolis. In December of 1964, she and Paul purchased the former A&W Root Beer Drive-In, now The Bears Den. They owned and operated the restaurant for 35 years, before retiring in 2000. Beverly was a member of Crossroad Community Church, and felt very blessed to be a part of its family. For 20 years, she had been a member of Psi Iota Xi Sorority, a philanthropic organization. In 1983, she was honored with its Psi Ote of the Year Award. Among Beverly’s wide variety of interests was traveling, especially where there was water. . .the East coast, Lake Michigan and the Ohio River. She was ALWAYS READY to spend time with her friends and family, church activities and playing cards with “The Gang”, “Club 61”, “First Tuesday Euchre Club”, “CCC Sweet Sisters” . . . and anyone else she could grab! Victory Field, Downtown Indy, was the perfect place (in Beverly’s opinion) to spend a summer’s afternoon. Beverly always considered herself a big kid at heart and loved taking in a trip to the zoo, whether it be in Cincinnati, Indianapolis or South Bend. However, you wouldn’t find her checking out the “residents” unless the grandkids were taking in the day with her. Made it more fun!! During her retirement years Beverly didn’t miss too many day at McDonald’s, East 44 at “the round table.” Having lunch with her buddies, saying hello to those who passed by and chatting with the employees, helped make for some fun in her days. Being very much a “people person” graced Beverly with a tremendous amount of joy, laughter and cherished friendships. She was so grateful to her Lord and Savior for the blessings he continually bestowed upon her days. In her later years, Beverly often reflected on 2 Timothy 4:7, I have fought the good fight, I have finished the course, I have kept the faith. Visitation will be from 3 to 7 p.m. Friday, September 13, 2019 at Freeman Family Funeral Homes and Crematory, Carmony-Ewing Chapel, 819 S. Harrison St. in Shelbyville. Funeral services will be at 10 a.m. Saturday, September 14, 2019 at the funeral home, with Pastor Andy Lee officiating. Interment will be at Forest Hill Cemetery in Shelbyville. To those of you who may wish to show a kindness in Beverly’s memory, as per her request, no flowers please. Possibly consider a contribution to the Ladies Ministry of Crossroad Community Church or the Shelby County Babe Ruth Organization. Online condolences may be shared with Beverly’s family at www.freemanfamilyfuneralhomes.com.
To order memorial trees or send flowers to the family in memory of Beverly Means, please visit our flower store.