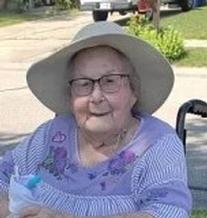 Billie Jean (Castleman) Young was born on August 31, 1928, in Marshall, Arkansas, to the late Vada Ella and Albert Buren Castleman. Billie attended school in Bowlegs, Oklahoma, before meeting recently discharged U.S. Marine Fines Young at a local hamburger stand in Marshall that Billie and a cousin owned. Fines and Billie married in 1946, when Billie was seventeen years old. Unbeknown to the young couple, this union would last the next 70 years. Fines and Billie continued to live in the south before moving to Shelby County, Indiana around 1954, where Billie was a dedicated homemaker to daughters Randy Beth and Rebecca “Beckie” Jean. While Fines served as a journeyman in the Sheet Metal Workers Local #20, he and Billie developed the Buck Creek Shades and Woodnotes subdivisions in Fairland, and built several of the homes themselves. Fines and Billie raised Simmental cattle and helped their young grandchildren with many 4H projects. In the early 1990’s after Fines had retired from the union, he and Billie moved back to Seminole, Oklahoma, where the two remodeled homes, gardened, fished, and traveled – oftentimes to Albuquerque, New Mexico, to visit family, and back to Indiana, to see grandchildren Carie, Corey, Jessica, and Matthew. As a young boy, Matthew dubbed Fines as “Pa” and Billie as “Granny,” names affectionately used to this day. Billie deeply loved and was extremely proud of her grandchildren. Fines and Billie moved back to Shelby County around 2007, and spent their remaining days surrounded by family. After Fines’ passing in 2017, Billie remained at home, cared for by Randy, Beckie, and a team of loving, dedicated caretakers. Billie enjoyed watching the birds, ducks, and geese from her dining room window, along with two squirrels she affectionately named “Mozo” and “Bozo.” Caretaker Cathy would often play the accordion or keyboard so that Billie could sing a Christian song or two. Billie’s last days and passing were quiet and peaceful. Billie is survived by daughters Randy Stein and Rebecca Matney, grandchildren Carie (Randy) Crafton, Corey (Jodi) Stein, Jessica (Shane) Griggs, and Matthew Matney, and great-grandchildren Laila and Ava Stein, and Ella and Eli Griggs. Welcoming her in heaven during the early morning hours of February 8, 2021, were husband Fines, daughter Michael Jane, mother and father Vada and Albert Buren Castleman, and sister Betty. Fines and Billie were long-time members of Calvary Tabernacle in Indianapolis, placing faith as forefront in life. Billie’s faith in Jesus was strong and unshaken to the end. In lieu of flowers, please send donations to Calvary Tabernacle Church, 902 Fletcher Avenue, Indianapolis, IN 46203. Visitation will be from 11 a.m. to 1 p.m. Thursday, February 11, 2021, at Freeman Family Funeral Homes and Crematory, Carmony-Ewing Chapel, 819 S. Harrison St. in Shelbyville. Funeral services will be at 1 p.m. Thursday at the funeral home, with Rev. Paul D. Mooney officiating. Interment will follow at Forest Hill Cemetery in Shelbyville. Online condolences may be shared with Billie’s family at www.freemanfamilyfuneralhomes.com.
To order memorial trees or send flowers to the family in memory of Billie Jean Young, please visit our flower store.