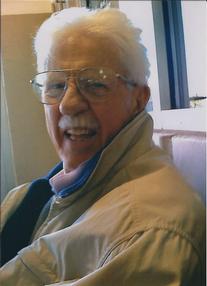 Blaine Morton Flick, 96, of Indianapolis, passed away Saturday, July 1, 2017 at Community Hospital North in Indianapolis. He was born March 20, 1921 in Marion County, the son of Oka Stanton and Durah (Long) Flick. In 1943, Blaine married the love of his life, Thelma Mae Carter, and she preceded him in death in May of 1979. On September 23, 1981, he married Aileene (Napier) Mullen, and she survives. Blaine is also survived by his sons, Dr. Larry Flick and wife, Marilyn, of Coburg, Oregon, Ted Flick and wife, Theresa, of Martinsville, and James Alderman and wife, Janice, of Ashland, Oregon; Aileene and Blaine’s angel, Cheyenne Meenach and husband, Karl, of Sheridan; sister-in-law, Joy and Bill Branson and family, of Nashville; brother-in-law, Randy and Sue Napier and family, of Shelbyville; several grandchildren including Dustin, Jason, Travis, Matt, Jamie and Matt; seven great-grandchildren; and several nieces and nephews. He was also preceded in death by his parents; brother, John Flick; and sister, Pat Christman. Blaine graduated from Arsenal Tech High School in Indianapolis, and continued to take college courses throughout his life at many different colleges. He was a lieutenant in the U.S. Navy, serving during World War II. Blaine served from 1940 to 1945, and was in the Reserves until 1953. Blaine retired from Western Electric/AT&T, where he was a department head over computer software. After retirement in 1985, he continued working by contract, often traveling to Spain to set up computer software. He loved to read books, often reading a book a week, and he enjoyed helping people by solving their computer software problems and writing software programs. Blaine and Aileene loved to travel taking many trips to Hawaii and other destinations, as well as a two- month trip around the world. Their traveling companions often included their family and friends. Visitation will be from 5 to 8 p.m. Thursday, July 6, 2017 at Freeman Family Funeral Homes and Crematory, Frazier Chapel, 124 E. North St. in Morristown. Funeral services will be at 10:30 a.m. Friday, July 7, 2017 at the funeral home, with Pastor Fred Hickman officiating. Military rites will be conducted at the funeral home, by the local military committee. Inurnment will be at Memorial Park Cemetery in Indianapolis. Aileene requests support of the Alzheimer’s Association, Greater Indiana Chapter, 50 E. 91st St., Suite 100, Indianapolis, IN 46240 or Morristown Christian Church, 209 S. Washington St., Morristown, IN 46161. Online condolences may be shared with the family at www.freemanfamilyfuneralhomes.com.
To order memorial trees or send flowers to the family in memory of Blaine Morton Flick, please visit our flower store.