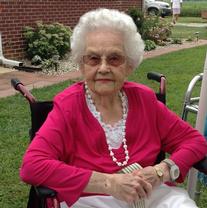 Charlene Virginia John, 96, of Shelbyville passed away Sunday, March 19, 2017 at Morristown Manor in Morristown. She was born September 2, 1920 in Rush County, the daughter of Edward and Roxie (Jones) Gahimer. She married Frank Raymond John on August 21, 1937 and he preceded her in death on April 14, 1995. After marrying Frank, she moved to Union Township, and has lived in the same house for over 72 years. Charlene is survived by daughters, Judy Douglas and husband, Paul, of Flat Rock, and Patty Shepherdson of Shelbyville; sons, Larry John and wife, Jean, and Tom John and wife, Diane, both of Shelbyville and a brother, Norman Gahimer and wife Hilda of Franklin. She had nine grandchildren; two step-grandchildren; 22 great-grandchildren; six step-great-grandchildren; 15 great-great-grandchildren; nine step-great-great-grandchildren; and several nieces and nephews. She was preceded in death by her parents; son-in-law, Bill Shepherdson; sisters, Maxine Lightner and Helen Rice; and brothers, Richard Gahimer, William Robert Gahimer, Byron Gahimer and Allen Ray Gahimer; a grandson; and a great grandson. Charlene was a member of the Manilla Christian Church where she played the organ for many years and taught Sunday School class. She became a member of Little Blue River Baptist Church when the Manilla church closed. She was a long time member of the Homemakers Social Study Club. She enjoyed cooking, sewing, knitting, crocheting, quilting and genealogy. She loved music and watching the Pacers, Colts, Big Ten basketball games and the Cincinnati Reds. Charlene loved to attend her grandchildren and great-grandchildren’s sporting events and musical productions. Visitation will be from 4 to 8 p.m. Wednesday, March 22, 2017 at Freeman Family Funeral Homes and Crematory, Carmony-Ewing Chapel, 819 S. Harrison St. in Shelbyville. Funeral services will be at 10 a.m. Thursday, March 23, 2017 at the funeral home, with Rev. David Lee officiating. Interment will be at Forest Hill Cemetery in Shelbyville. Memorial contributions may be made to Little Blue River Baptist Church, 3515 N 500 E, Shelbyville, Indiana 46176 or Major Hospital Foundation, 2325 Intelliplex Drive, Suite 201, Shelbyville, Indiana 46176.
To order memorial trees or send flowers to the family in memory of Charlene Virginia John, please visit our flower store.