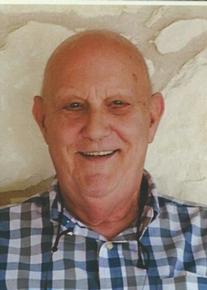 Charles T. “Chuck” Hubler, 74, of Shelbyville, passed away Saturday, October 28, 2017 at his residence. He was born September 22, 1943, in Shelbyville, the son of Wayne G. and Anna R. (Paige) Hubler. On August 10, 1974, he married his wife of 43 years, Peggy (Mohr) Hubler, and she survives. In addition to Peggy, Chuck is survived by his children, Todd Williamson of Shelbyville, Dianne Cline and husband, Ronald, of Fairland, Charles Hubler of Fort Wayne, and Chris Hubler and wife, Tami, of Pendleton; sister, Carol McBride of Seymour; grandchildren Jacob Williamson, Rachel Williamson, Ty Cline, Bradly Cline and Jacob Hubler; father-in-law, George “Dewey” Mohr of Shelbyville; and several nieces and nephews. Chuck was preceded in death by his parents; and grandsons, Chase Hubler and Eli Hubler, whom were waiting on him. He graduated from Shelbyville High School in 1961, and attended the University of Evansville from 1962 to 1964. Chuck was a member of Mount Gilead Baptist Church. He was a banker from 1963 to 1992, working at Indiana National Bank and Merchants Bank in Indianapolis. After retirement, Chuck enjoyed driving a truck for Sharon Brown Trucking in New Pointe, for 16 years. Chuck was a 53 year member of Shelby Lodge No. 28 F&AM in Shelbyville. He enjoyed reading, watching television and working crossword puzzles. He loved to attend sporting events and marching band contest, in which his grandchildren participated. Visitation will be from 10 to noon, Wednesday, November 1, 2017 at Freeman Family Funeral Homes and Crematory, Carmony-Ewing Chapel, 819 S. Harrison St. in Shelbyville. Funeral services will be at noon, Wednesday at the funeral home, with Pastor Andy Lee officiating. Interment will be at Forest Hill Cemetery in Shelbyville. Memorial contributions may be made to Our Hospice of South Central Indiana, 2626 17th St., Columbus, Indiana 47201 or Cancer Association of Shelby County, PO Box 844, Shelbyville, Indiana 46176. Online condolences may be shared with Chuck’s family at www.freemanfamilyfuneralhomes.com.
To order memorial trees or send flowers to the family in memory of Charles T. "Chuck" Hubler, please visit our flower store.