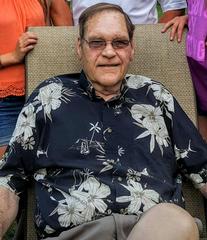 Dale E. Morrow, 69, of Shelbyville, passed away Friday, April 14, 2017 at his residence. He was born October 6, 1947, in Richmond, the son of Leland E. and Lucy F. (Franklin) Morrow. On November 20, 1966, he married Kathleen L. “Kathy” Hawisher, and she preceded him in death on June 29, 2010. Dale is survived by his son, Bradley D. Morrow and wife, Angel, of Crestwood, Kentucky; daughter, Jennifer L. Burke and husband, Jeff, of Indianapolis; sisters, Shirley F. Lang and husband, Bill, and A. Annette Skinner and husband, Jan, both of Liberty; brother, Thomas E. Morrow and wife, Cathy, of New Palestine; and granddaughters, Caitlyn and Emily Burke, and Carsyn and Sydney Morrow. He was also preceded in death by his parents. Dale graduated from Short High School in Liberty in 1965. He was formerly the golf pro at the Shelbyville Elks Country Club from 1970 to 1994; and from 1997 until retiring in October of 2009, he was a realtor at Carpenter Realty. After retiring he worked as a cashier at Indiana Live Casino and drove cars for Sandman Brothers. Dale was a life member of the PGA of America and received the PGA Horton Smith Award in 1992. He served two terms on the Indiana PGA Board of Directors. He also served on the Board of Directors for Girls, Inc. Dale was awarded the John Hartnett Award by the Shelby County Chamber of Commerce. Visitation will be from 4 to 8 p.m. Friday, April 21, 2017 at Freeman Family Funeral Homes and Crematory, Carmony-Ewing Chapel, 819 S. Harrison St. in Shelbyville and from 10 to 11 a.m. Saturday, April 22, 2017 at West Point Cemetery in Liberty, Indiana. A celebration of Life will be at 11 a.m. Saturday, April 22, 2017 at the cemetery. Memorial contributions may be made to the Indiana Golf Foundation, P.O. Box 516, Franklin, Indiana 46131.
To order memorial trees or send flowers to the family in memory of Dale E. Morrow, please visit our flower store.