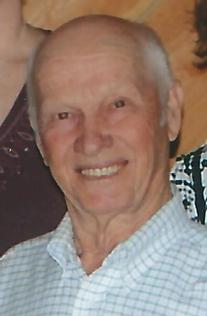 Don Meinders, 89, of Milan, passed away Thursday, December 28, 2017. He was born September 16, 1928, in Milan, the son of Charles and Lula (Grothman) Meinders. In August of 1961, he married Betty Hollingsworth, and she preceded him in death on June 26, 1978. Don is survived by his sons, Jeff Meinders and wife, Leah, and Jarred Meinders, all of Milan; daughters, Ginny Yorn and husband, Kirk, of Batesville, Jackie Meinders and wife, Vanessa, of Columbus, Chelsa Dwenger and husband, Melvin, of Osgood, and Christal Musser and husband, Curtis, of Otterbein; sister, Alethea Meinders of Milan; grandchildren, Chad Meinders, Heath Meinders, Garrett Yorn, Ian Yorn, Maverick Dwenger, Baylee Dwenger, Clark Dwenger, Shayla Meinders, Carlee Musser, Catie Musser and Clayton Musser; great-grandchildren, Chase Meinders, Blake Meinders and Kylee Meinders. He was also preceded in death by his parents; brother, Charles Meinders; and sisters, Dorothy Meinders and Leona Meinders Winton. Don graduated from Milan High School in 1947. He was a U.S. Army veteran, serving from February 10, 1954 to December 2, 1955. Don was a lifelong farmer. He was a member of the Milan American Legion Post No. 235. Don was an avid boys and girls high school basketball fan and enjoyed reminiscing about the Milan ’54 team and supporting the current teams. He was also an avid supporter of 4-H, he took pride in watching his children and grandchildren exhibit their projects. Visitation will be from 4 to 8 p.m. Sunday, December 31, 2017 at Laws-Carr-Moore Funeral Home, 707 S. Main St. in Milan. Funeral services will be at 11 a.m. Monday, January 1, 2018 at the funeral home, with Rev. Francis J. “Frank” Eckstein officiating. Interment will be at Saint Paul Lutheran Cemetery in Milan. Memorial contributions may be made to the Milan American Legion Post No. 235 Scholarship or the Ripley County 4-H Corporation, in care of the funeral home. Online condolences may be shared with Don’s family at www.lawscarrmoore.com.
To order memorial trees or send flowers to the family in memory of Don Meinders, please visit our flower store.