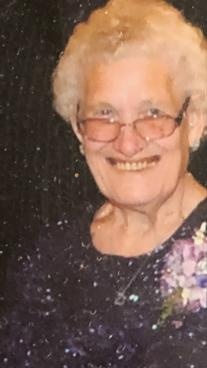 Doris M. Rhodes, 88, of Shelbyville passed away Wednesday, May 15, 2019 at her home. She was born November 12, 1930, in Rushville, the daughter of William Hershal and Helen (Wilson) Schmall. On April 4, 1953, she married Robert Earl Rhodes, and he preceded her in death on December 19, 1984. Doris is survived by her daughter, Denise Rhodes of Shelbyville; son, Dennis Rhodes and wife, Connie, of Nashville; grandchildren, Erin Rhodes, Kylie Rhodes Gady and husband, Evan, and Andrew Rhodes and wife, Larissa; great-grandchildren, Carson Gady, Sydney Gady, Kinsey Gady, Ellie Rhodes and Beckham Rhodes; and several nieces and nephews. In addition to Robert, Doris was preceded in death by her parents; and brothers, Harold Schmall, Gerald Schmall and Paul Schmall. Doris graduated from Rushville High School in 1951. She was a stay at home mother for most of her life. Later, she worked at Carter Lumber part time for several years, and was a greeter at Walmart for over 10 years. Doris was an associate member of Kappa Delta Phi Sorority. Doris enjoyed spending time with her family and friends, and talking to anyone that would listen. She also enjoyed league bowling, watching birds and traveling. Doris also leaves behind her dog, Oreo. Visitation will be from 1 to 3 p.m. Saturday, May 18, 2019 at Freeman Family Funeral Homes and Crematory, Carmony-Ewing Chapel, 819 S. Harrison St. in Shelbyville. Funeral services will be at 3 p.m. Saturday at the funeral home. Interment will be at East Hill Cemetery in Rushville. Memorial contributions may be made to the Cancer Association of Shelby County, PO Box 844, Shelbyville, Indiana 46176 or the Shelbyville-Shelby County Animal Shelter, 705 Hale Road, Shelbyville, Indiana 46176. Online condolences may be shared with Doris’ family at www.freemanfamilyfuneralhomes.com.
To order memorial trees or send flowers to the family in memory of Doris M. Rhodes, please visit our flower store.