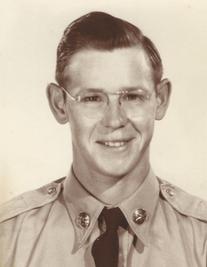 Duane Stucker, 87, of Franklin, formerly of Atterbury and Fairland, passed away Saturday, March 24, 2018 at the Indiana Masonic Home in Franklin. He was born March 15, 1931, in Bartholomew County, the son of Ray and Helen (Essex) Stucker. On May 8, 1953, he married his wife of 64 years, Mary Jane Young, and she survives. In addition to Mary Jane, Duane is survived by his sons, Michael Stucker and wife, Beth, of Omaha, Nebraska, and Robert Stucker of Lakeland, Florida; daughter, Debra Petitt of Shelbyville; sisters, Lillian Kissel of Greenfield and Teresa Woods of Shelbyville; seven grandchildren; 16 great-grandchildren; and several nieces and nephews. Duane was preceded in death by his parents; brothers, Dale Stucker and Lewis Stucker; and brothers-in-law, Pete Kissel and Tom Woods. He graduated from Fairland High School in 1949. Duane was a member of Fairland Baptist Church. He was a veteran of the U.S. Army, Sergeant First Class, serving in the Vietnam and Korean Wars, retiring in 1971. After retirement, he worked and later retired from the State of Indiana National Guard, armory maintenance. He was a member of the Veterans of Foreign Wars. Duane was a very active member of the following Masonic organizations, he was Past Master of Sugar Creek Lodge No. 279 F.&A.M. and William Hacker Lodge No. 759 F.&A.M.; Past High Priest of Shelby Chapter No. 20 R.A.M. and Marvin L. Isley Chapter No. 169 R.A.M.; Past Illustrious Master of Shelby Council No. 3 R&S Master and Ferrell Council No. 113 R&S Master; Past Commander of the Baldwin Commandery No. 2 K.T. and William G. Bray Commandery No. 65 K.T.; Past Grand Commander of Grand Commandery of Indiana K.T. from 1994-1995; Past Knight Commander of Indiana Past Commandery Association; Past Prior of Robert A Woods Priory No. 62 KYCH; Treasurer of Marvin L. Isley York Rite College No. 129; Deputy Preceptor of St. Andrew Tabernacle No. XXXV HRAKTP; Junior Deacon of St. Martin Council No. UD; Past Patron of Fairland Chapter Order of Eastern Star No. 359; Warder of Columbus Court No. 30 Amaranth; and Vice Chancellor of Knights of Pythias Brotherhood Lodge No. 357. He was also a member of the Knightstown Commandery No. 9 K.T., St. James Conclave Red Cross of Constantine, St. Bartholomew Council No. 295 AMD, Knight Masons Indiana Council No. 15, Indianapolis Valley Ancient Accepted Scottish Rite, Sahara Grotto Indianapolis, Council of Anointed High Priest, Indiana Council of Thrice Illustrious Masters and The Royal Order of Scotland. Visitation will be from 5 to 7 p.m. Wednesday, March 28, 2018 at Freeman Family Funeral Homes and Crematory, Carmony-Ewing Chapel, 819 S. Harrison St. in Shelbyville, with the Eastern Star service beginning at 7 p.m. followed by the Masonic Ritual. Funeral services will be at 10 a.m. Thursday, March 29, 2018 at the funeral home. Interment will be at Fairland Cemetery in Fairland, with military graveside rites conducted by the local military committee. Memorial contributions may be made to the American Diabetes Association, 8604 Allisonville Road, Suite 140, Indianapolis, Indiana 46250. Online condolences may be shared with Duane’s family at www.freemanfamilyfuneralhomes.com.
To order memorial trees or send flowers to the family in memory of Duane Stucker, please visit our flower store.