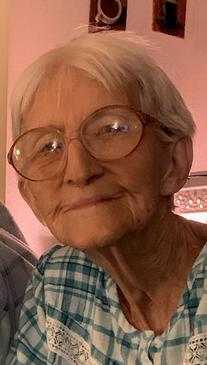 Edna Mae Yeley, 98, of Shelbyville passed away Saturday, May 29, 2021, at Heritage House of Shelbyville. She was born September 4, 1922, in Shelbyville, the daughter of Ollie and Mattie (Janes) Dixon. She married Ralph Yeley on December 23, 1972, and he preceded her in death on April 23, 1992. Edna is survived by her daughter, June Hodge Drew of Indianapolis; 11 grandchildren including Lisa Chastain of Indianapolis; and numerous great-grandchildren, great-great-grandchildren, nieces and nephews. In addition to Ralph, Edna was preceded in death by her parents; daughters, Edna Sturgill and Sharon McDaniel; granddaughters, Janetta Hodge and Tonya Able; brothers, Clarence Dixon and Dallas Dixon; and sister, Ruby Schlosser. Edna was a member of the Grace Wesleyan Church and the Wesleyan Women International. She was a former member of the Eagles Lodge. Edna had formerly worked at Admiral Corporation, General Electric and retired from Plastic Moldings in 1986. Graveside services will be at 11:30 a.m. Tuesday, June 1, 2021 at Lewis Creek Cemetery in Shelby County. Services have been entrusted to Freeman Family Funeral Homes and Crematory, 819 S. Harrison St. in Shelbyville. Memorial contributions may be made to Grace Wesleyan Church, 56 E. Franklin St., Shelbyville, Indiana 46176. Online condolences may be shared with Edna’s family at www.freemanfamilyfuneralhomes.com.
To order memorial trees or send flowers to the family in memory of Edna Mae Yeley, please visit our flower store.