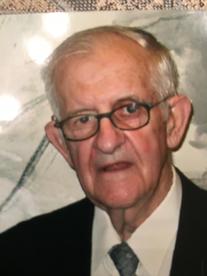 Edward P. Ranochak, 94, of Shelbyville, passed away Monday, November 20, 2017 at his home. He was born June 22, 1923, in Portage, Pennsylvania, the son of Michael and Mary (Yanosik) Ranochak. On February 7, 1948, he married his wife of nearly 70 years, Lucille (Rainey) Ranochak, and she survives. In addition to Lucille, Ed is survived by his daughters, Kathy Mogelson and husband, Stu, of Minneapolis, Minnesota, Patty Ann Beckler and husband, Gerald, and Chris Nartker and husband, Tom, both of Boise, Idaho; sons, Jim Ranochak and wife, Patty Jean, of Fort Wayne, David Ranochak and wife, Shelly, of Cincinnati, Ohio, and Kevin Ranochak and wife, Shirley Pence, of Shelbyville; sisters, Ellen Ranochak of Washington, D.C., Marge Klein of Texas, and Barb Hillman of LaGrange; brothers, Bob Ranochak and wife, Joan, of Ukia, California, and Ron Ranochak and wife, June, of Florida; 11 grandchildren and 10 great-grandchildren. He was preceded in death by his parents; and brother, Michael Ranochak. Ed graduated from high school in Portage, Pennsylvania in 1942, and received his bachelors’ degree in mechanical engineering from Penn State in 1950. He was a member of St. Joseph Catholic Church. Ed was a U.S. Army veteran, serving as staff sergeant during World War II. He worked at Pittsburg Plate Glass, as a project manager. Ed then purchased People’s Heating and Cooling. After retirement, he volunteered at St. Joseph Catholic Church for 10 years, helping to restore St. Joseph’s Catholic School and Church. Ed was also a member of Kiwanis, where he served one term as Lt. Governor, and a 50-year member of Knights of Columbus. He served one term as a city councilman, representing the 3rd Ward. Ed was an avid fisherman, and loved all sports. He was an incredible cook. Visitation will be from 9 to 10:30 a.m. Friday, November 24, 2017 at Freeman Family Funeral Homes and Crematory, Carmony-Ewing Chapel, 819 S. Harrison St. in Shelbyville, with the rosary recited at 9 a.m. A Mass of Christian Burial will be at 11 a.m. Friday, at St. Joseph Catholic Church, 125 E. Broadway St. in Shelbyville, with Father Mike Keucher officiating. Interment will be at St. Joseph Catholic Cemetery in Shelbyville, with military graveside rites conducted by the local military committee. Memorial contributions may be made to St. Joseph Catholic Church, 228 E. Hendricks St., Shelbyville, Indiana 46176 or Shelbyville-Shelby County Animal Shelter, 705 Hale Road, Shelbyville, Indiana 46176. Online condolences may be shared with Ed’s family at www.freemanfamilyfuneralhomes.com.
To order memorial trees or send flowers to the family in memory of Edward P. Ranochak, please visit our flower store.