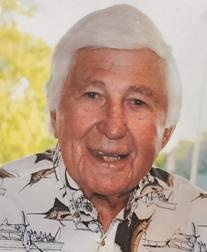 Edwin (Ed) McLean Indianapolis - Edwin (Ed) G. McLean, 93, of Indianapolis, passed away at his home on April 8th, 2020. Ed was born on July 28th, 1926, to Cleo and Beatrice (Cunningham) McLean in Indianapolis. In 1955, he married Esther (McKinney), who survives. They shared 64 years of marriage together. After graduating from Arsenal Tech High School, he went on to play baseball and football at Indiana University. During his time at IU, he was drafted into the Navy and returned to IU after World War II. He had a lengthy career as a salesman for Sperry & Hutchinson Co. selling Green Stamps. He also worked for Circle City Fence Co. and Auto Dealers Exchange in his retirement years. He enjoyed playing golf, horse races, and yearly family vacations to North Myrtle Beach. Ed was predeceased by his parents and brother, Bill. He is survived by his wife, Esther; children, Cindy (Dan) Bradfield, Kathe (Mike) Borgman, Elaine McLean, Stephen (Susan) McLean; grandchildren, Ryan (Jammie) Huddleston, Casey Chambers, Kayla McLean and Jake Hillyer; and great-grandchildren, Conner and Max Huddleston. A graveside service will be held on Friday, April 8, 2022 at Asbury Cemetery in Morristown. Services have been entrusted to Freeman Family Funeral Homes and Crematory, 124 E. North St. in Morristown. Online condolences may be shared with Ed’s family at www.freemanfamilyfuneralhomes.com.
To order memorial trees or send flowers to the family in memory of Edwin "Ed" McLean, please visit our flower store.