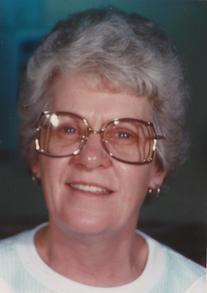 Eldora Mae “Sam” West, 84, of Shelbyville, passed away Sunday, August 13, 2017 at Ashford Place Health Campus in Shelbyville. She was born October 14, 1932, in Lapeer, Michigan, the daughter of Harry and May (Hiltz) Johnson. Eldora is survived by her daughter Penny Jessup of Shelbyville; sons, Tim West and wife, Denneise, of Martinsville, David West and wife, Angela, of North Vernon, Jim Welch and wife, Dianna, of Levering, Michigan, and Larry Welch and wife, Patti, of Gallatin, Tennessee; sister, Lois Slay of Arizona; 12 grandchildren; and several great-grandchildren and nieces and nephews. She was preceded in death by her parents; sisters, Virginia Johnson and Nancy Johnson; and brothers, Edward Johnson, Pete Johnson and Harry Johnson. Eldora graduated from Lapeer High School in Lapeer, Michigan in 1950. She retired from Williams Industries in 1996. Eldora enjoyed collecting rocks and bird figurines. She was an advocate for the preservation of covered bridges. A gathering of friends will be from 5 to 6 p.m. Friday, August 18, 2017 at Freeman Family Funeral Homes and Crematory, Carmony-Ewing Chapel, 819 S. Harrison Street in Shelbyville. A memorial service will be at 6 p.m. Friday at the funeral home, with Pastor Gwen Pew officiating. Memorial contributions may be made to the American Diabetes Association, 8604 Allisonville Road, Suite 140, Indianapolis, Indiana 46250. Online condolences may be shared with Eldora’s family at www.freemanfamilyfuneralhomes.com.
To order memorial trees or send flowers to the family in memory of Eldora Mae "Sam" West, please visit our flower store.