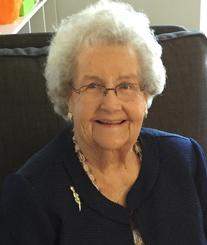 Elinora Imel, 93, of Fountaintown, peacefully passed away on Sunday, December 24, 2017 at her daughter’s home in Knightstown. She was born February 28, 1924, in Shelby County, the daughter of Walter and Nellie (Bausback) Sosbe. On July 12, 1946, she married her husband of 56 years, Harold R. Imel, and he preceded her in death on December 21, 2002. Elinora is survived by her son, Doug Imel and wife, Kristina, of Tipp City, Ohio; daughter, Deena Elliott and husband, Tom, of Knightstown; grandchildren, Stacy Imel Rogers and husband, Charlie, Valerie Elliott Williams and husband, Daniel, Daniel Elliott and wife, Richelle, Jacob Imel and Jennifer Imel; great-grandchildren, Jocelyn Elliott, Graydan Elliott and Dennen Williams; family friend, Kay Goldsberry of Greenwood; and numerous nieces and nephews. She was also preceded in death by her parents; son, Paul Allen Imel; sisters, Mary Brokering, Ida Parrott and Edna Baker; and brothers, Walter “Pete” Sosbe, Charles Sosbe, Henry Sosbe, Richard Sosbe and Carl Sosbe. Elinora graduated from Moral Township High School in 1943. She was a member of Pleasant View Baptist Church. Elinora was a homemaker. She formerly worked for the State of Indiana, where she worked in the Gross Income Tax office and later as a data entry clerk in the Employment Security (Social Security office) for six years, until 1949. In 1971, she became a cook at Triton North Elementary School, until retiring in 1980. She was a 50-year member of Silver Brandywine Home Extension Club. Elinora was very active in her children’s activities, being a Cub Scout Den Mother for Troop No. 248 and serving as president of PTA. Visitation will be from 4 to 8 p.m. Thursday, December 28, 2017 at Freeman Family Funeral Homes and Crematory, Carmony-Ewing Chapel, 819 S. Harrison St. in Shelbyville. Funeral services will be at 10 a.m. Friday, December 29, 2017 at the funeral home, with Mark Kern officiating. Interment will be at New Palestine Cemetery in New Palestine. Memorial contributions may be made to the donor’s choice of charity. Online condolences may be shared with Elinora’s family at www.freemanfamilyfuneralhomes.com.
To order memorial trees or send flowers to the family in memory of Elinora Imel, please visit our flower store.