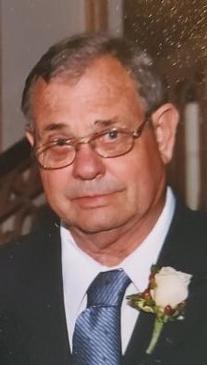 Forrest Merrill “Bud” True, 82, of Flat Rock passed away Thursday, November 12, 2020, at his daughter’s home. He was born August 21, 1938, in Indianapolis, the son of Forest S. and Alverta (Lewis) True. On August 29, 1959, he married his wife of 61 years, Joyce M. Ryan, and she survives. In addition to Joyce, Bud is survived by daughters, Kelli Kappus and husband, Bob, of Indianapolis, Janice Huntsman and husband, Jerry, of Flat Rock, Teresa Lain and husband, Jack of Shelbyville, and Kathleen Krajcir and husband, Stephen, of Indianapolis; son, Jim True of Shelbyville; grandchildren, Leslie Foxlow, Joe Kappus, Anne Marie Kappus, James Huntsman, Susan Runnebohm, Jonathan Huntsman, Erika Huntsman, Beth Lain, Danny Lain, Tony Lain, Kevin Lain, Melissa Anthony, Amanda Jones and Stephen Krajcir; 21 great-grandchildren; and several nieces and nephews. Bud was preceded in death by his parents; brothers, Rex True and Ernest True; and sister, Betty Haymaker. He graduated in 1956 from Southport High School. Bud worked for Culligan Fire Protection, as a sprinkler fitter, from 1961 to 1996. In 1996, he began working at the YMCA Flat Rock River Camp, until retiring in 2001. He enjoyed his life in the country. He was a member of Local Union No. 669 of the Sprinkler Fitters. Bud was very active in the Waldron Little League from 1974 to 1979. He enjoyed woodworking, Bud made a cradle for each great-grandchild and a rocking chair for each grandchild. Bud also leaves behind his kitty. Visitation will be from 2 to 6 p.m. Sunday, November 15, 2020, at Freeman Family Funeral Homes and Crematory, Carmony-Ewing Chapel, 819 S. Harrison St. in Shelbyville. Funeral services will be at 11 a.m. Monday, November 16, 2020, at the funeral home. Interment will be at St. Vincent de Paul Catholic Cemetery in Shelbyville. Memorial contributions may be made to the Cancer Association of Shelby County, PO Box 844, Shelbyville, Indiana 46176. Online condolences may be shared with Bud’s family at www.freemanfamilyfuneralhomes.com.
To order memorial trees or send flowers to the family in memory of Forrest Merrill "Bud" True, please visit our flower store.