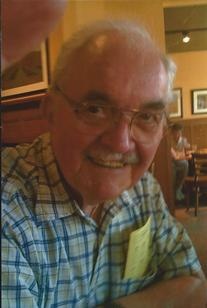 Gene Reneau, 86, of Indianapolis, formerly of Shelby County, passed away Monday, January 8, 2018 at Ashford Place Health Campus in Shelbyville. He was born June 20, 1931, in Knightstown, the son of William Logan and Leora Alice (Dillon) Reneau. He married Lavada Babe (Paswaters) on November 21, 1970, and she preceded him in death on January 11, 1995. On November 16, 1996, he married Margie (Burns), and she also preceded him in death. Gene is survived by his daughters, Terri Gail Sprankle, Amy Kingery and husband, Bill, both of Greenfield, and Brenda Rager and husband, Kevin, of Greenwood; sons, Russell Steven Reneau of Jefferson, South Carolina and Ronald Stuart Reneau of Shelbyville; nine grandchildren; 11 great-grandchildren; best friend, Ed Hoeping and family of Greenwood; and several nieces and nephews. He was also preceded in death by his parents; brothers, Glen Reneau, Cecil Reneau and Howard Reneau; and sister, Norma Ziegler. Gene was a member of the Fairland Baptist Church. He was a U.S. Army veteran, serving during the Korean Conflict. Gene retired from Wellman Thermal Systems in 1993, with 36 years of service. He also owned and operated, B&G Engravers, for several years. He enjoyed square dancing and calling dances; and was a member of the Indiana Dancers Association and the Indiana State Callers Association. Gene was also a baseball fan. Visitation will be from 5 to 8 p.m. Thursday, January 11, 2018 at Freeman Family Funeral Homes and Crematory, Carmony-Ewing Chapel, 819 S. Harrison St. in Shelbyville. Funeral services will be at 10 a.m. Friday, January 12, 2018 at the funeral home, with Rev. Bill Horner officiating. Interment will be at Forest Hill Cemetery in Shelbyville. Online condolences may be shared with Gene’s family at www.freemanfamilyfuneralhomes.com.
To order memorial trees or send flowers to the family in memory of Gene Reneau, please visit our flower store.