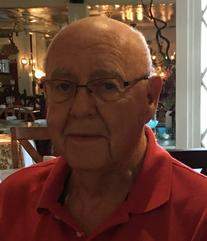 George J. Burris, 84, of Morristown passed away Monday, August 9, 2021, at Franciscan St. Francis Health in Indianapolis. He was born June 25, 1937, in Carthage, the son of George and Opal (Six) Burris. On November 3, 1963, he married his wife of 57 years, Gleoria Brewer, and she survives. In addition to Gleoria, George is survived by his daughter, Lori Burris of Morristown; brothers, William “Henry” Burris and Joseph Allen Burris, both of Connersville, sisters, Alice Duerigen of Vero Beach, Florida, Judith Baker of Indianapolis, and Sharon Turner and husband, Kenneth, of Bainbridge; and several nieces and nephews. He was preceded in death by his parents; son, Jeffrey Burris; brothers, Charles Burris and Harlan Burris; and sister, Caroline Jones. George formerly worked at Borden’s Ice Cream Company from 1954 to 1980. He retired in 1992, from Maplehurst Dairy, with 12 years of service. He served in the U.S. Army National Guard Reserves. George enjoyed working in his yard and going fishing. Visitation will be from 11 a.m. to 1 p.m. Saturday, August 14, 2021, at Freeman Family Funeral Homes and Crematory, Frazier Chapel, 124 E. North St. in Morristown. Funeral services will be at 1 p.m. Saturday at the funeral home, with Ray Brewer officiating. Interment will be at Asbury Cemetery in Morristown. Memorial contributions may be made to American Heart Association, 300 S. Riverside Plaza, Suite 1200, Chicago, Illinois 60606-6637. Online condolences may be shared with George’s family at www.freemanfamilyfuneralhomes.com.
To order memorial trees or send flowers to the family in memory of George J. Burris, please visit our flower store.