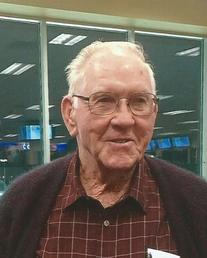 Harold E. “Chick” Tennell, 92, of Shelby County passed away Monday, June 10, 2019 at MHP Medical Center in Shelbyville. He was born January 4, 1927, in Bengal, the son of Cecil and Dorothy D. (Goff) Tennell. On March 2, 1947, he married his wife of 72 years, Martha Johnson, and she survives. In addition to Martha, Chick is survived by his sons, Andrew Tennell and wife, Theresa, of Edinburgh, and Timothy Todd Tennell and wife, Lori, of Franklin; daughter-in-law, Melody Tennell Lux and husband, Greg, of St. Paul; sister, Rose Hellmich of Greensburg; brother, Ronnie Tennell and wife, Jean, of Flat Rock; grandchildren, Jeff Tennell and wife, Amanda, Jay Tennell and wife, Becca, Julie Tennell, Scott Tennell and wife, Jennifer, Carson Tennell, Cole Tennell and wife, Jennah, and Carrie Smithson and husband, Curtis; great-grandchildren, Jenson Tennell, Jayda Tennell, Addy Tennell, Casey Tennell, Caleb Tennell, Zack Tennell, Devin Tennell and Chad Tennell; step-great-grandchildren, Kayln and Bryce; and numerous nieces and nephews. He was preceded in death by his parents; son, Michael Gene Tennell; sisters, Doris Kendall, Betty Runshe and Norma Meal; and brothers, Cecil C. Tennell Jr., Maurice D. Tennell and William Tennell. Chick graduated from Boggstown High School in 1945. He was a U.S. Army veteran, serving in Germany during World War II. Chick was a lifelong farmer and loved to farm his land. In 2015, he was awarded the Ag Promotional Lifetime Achievement Award, Chick was a member of the Farm Bureau Co-Op for 52 years. He was a member of the Bengal Christian Church and served as a trustee. Chick was also serving on the Second Mount Pleasant Cemetery Board. He was also a member of the Marietta Fire Department for 22 years and served as a director for 15 of those years. Chick was a charter member of the Central Indiana Bass Club for 25 years. Visitation will be from 4 to 8 p.m. Thursday, June 13, 2019 at Freeman Family Funeral Homes and Crematory, Carmony-Ewing Chapel, 819 S. Harrison St. in Shelbyville. Funeral services will be at 10 a.m. Friday, June 14, 2019 at the funeral home, with Pastor Doug Adams officiating. Interment will be at Second Mount Pleasant Cemetery in Johnson County. Memorial contributions may be made to the Bengal Christian Church, in care of the funeral home. Online condolences may be shared with Chick’s family at www.freemanfamilyfuneralhomes.com.
To order memorial trees or send flowers to the family in memory of Harold E. "Chick" Tennell, please visit our flower store.