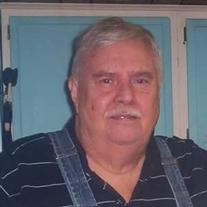 Herman L. Brunner, 81, of Shelbyville, passed away Sunday, July 16, 2017 at Ashford Place Health Campus in Shelbyville. He was born October 17, 1935, in Osgood, the son of Melvin and Pearl (Carson) Brunner. On December 13, 1957, he married his wife of 59 years, Polly Cope, and she survives. Herman is also survived by his daughter, Helen Brunner of Whiteland; son, Billy Brunner and wife, Carry, of Shelbyville; grandchildren, Shelby, Shane, Tiffany, Nikki, Amanda, Courtney, Brad, Grover, Benjamin and Justin; and six great-grandchildren. He was preceded in death by his parents; and a daughter, Marilyn Brunner. Herman was a member of Bethel Baptist Church. He retired from Ford Motor Company, with 30 years of service. Herman enjoyed woodworking and playing guitar. He loved his cats. Visitation will be from 10 to noon, Saturday, July 22, 2017 at Freeman Family Funeral Homes and Crematory, Carmony-Ewing Chapel, 819 S. Harrison St. in Shelbyville. Funeral services will be at noon Saturday at the funeral home. Interment will be at St. John Lutheran Cemetery in Napoleon. Memorial contributions may be made to the Salvation Army, 136 E. Washington St., Shelbyville, Indiana 46176. Online condolences may be shared with the Brunner family at www.freemanfamilyfuneralhomes.com.
To order memorial trees or send flowers to the family in memory of Herman L. Brunner, please visit our flower store.