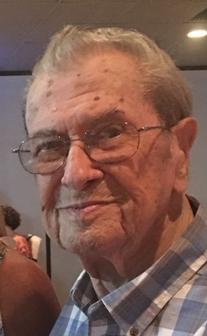 Homer “Bud” Wertz Jr., 94, of Shelbyville, passed away Thursday, April 28, 2022. He was born May 8, 1927, in Shelbyville, the son of Homer Sr. and Phoebe “Mae” (Drake/Conover) Wertz. On August 14, 1948, he married Pauline L. “Paulie” Cummings, and she preceded him in death on February 8, 2009. Bud is survived by his daughter, Belinda Fairchild of Shelbyville; son, Greg Wertz and wife, Traci, of Mooresville; daughter-in-law, Phyllis Wertz of Amelia Island, Florida; grandchildren, Chris Wertz and significant other, Shayne Gordon, Danielle Wertz, Nicholas Cooper and wife, Michelle, Monica Cooper and significant other, Jeremy Johnson, Garrett Wertz and wife, Delaney, and Seth Wertz; great-grandchildren, Tiffany Wertz-Holloway and husband, Tyler, Joshua Cooper, Bethany Cooper, Emma Cooper-Johnson, Charlotte Cooper and Lucia Cooper; great-great-grandson, Theo Holloway; and niece, Cyndi Favreau and many other nieces and nephews. In addition to Paulie, Bud was preceded in death by his parents; son, Terry Wertz; and sister, Patricia “Pat” Wertz West and husband, Bob. Bud graduated in 1945 from Shelbyville High School, and continued his education at Hanover College. He received his Masters of Education degree from Indiana University. He was a World War II veteran, having served in the Army. Bud was a member of First Presbyterian Church, where he sang with the choir for many years. He was the Regional Manager for Associates Finance Company, for 17 years. He then taught fifth grade math at Coulston Elementary, for 17 years. He also owned rental properties in Shelbyville. Bud had a love of music and often accompanied many of the high school band students in state competition. He played the clarinet in the Shelby Community Band and with the Dixie Cats, for 20 years. Bud was a very talented pianist and enjoyed Big Band music. He and Paulie enjoyed dancing, clearing many dance floors, for others to watch them. He also enjoyed playing bridge, boating, fishing, and traveling. In 1985, in honor of their retirement, their children started the Wertz Scholarship for graduating seniors from Shelbyville High School pursuing a career in the field of education. Visitation will be from 1 to 3 p.m. Saturday, May 7, 2022, at Freeman Family Funeral Homes and Crematory, Carmony-Ewing Chapel, 819 S. Harrison St. in Shelbyville. Private graveside services will be conducted at Forest Hill Cemetery, with Rev. Mark Morningstar officiating. Military graveside rites will be conducted by the local military committee. Memorial contributions may be made to First Presbyterian Church, 124 W. Broadway St., Shelbyville, IN 46176 or Shelby Community Band, 1201 N. Riley Highway, Shelbyville, IN 46176. Online condolences may be shared with Bud’s family at www.freemanfamilyfuneralhomes.com.
To order memorial trees or send flowers to the family in memory of Homer "Bud" Wertz Jr., please visit our flower store.