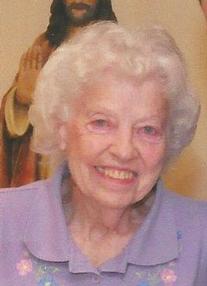 Irene Louise (Rusch) Hartnett 94, of Shelbyville, passed away Sunday, December 16, 2018 at St Paul Hermitage in Beech Grove, Indiana. She was born Irene Louise Rusch on October 20, 1924 in Somerset, Kentucky, the daughter of Frank and Elizabeth (Myers) Rusch as the youngest of six children. She married John Hartnett, Sr on August 31, 1953 at St Mildred’s Catholic Church in Somerset. He preceded in her death on July 9, 1991. She is survived by sons John Hartnett, Jr and wife, Karen (Corley) of Shelbyville and Patrick Hartnett and wife, Karen (O'Gara) of Indianapolis as well as grandchildren Derek (Cincinnati), John (Shelbyville), Holly, Hannah and Brendan (Indianapolis). Irene graduated from Somerset High School in 1942. She was a 58-year member of St Joseph Catholic Church where she was a member of St Ann’s Altar Society and served two terms on the St Joseph Parish Council. She worked in the accounting department at General Phone Company in Somerset. Mrs. Hartnett and her family moved to Shelbyville in 1960, when her husband became a founding partner and general manager of WSVL Radio. She intermittently worked as a part-time bookkeeper for the station and functioned as treasurer for the Shelby County Broadcasting Corporation during the sales of WSVL-FM in 1981 and WSVL-AM in 1988. Through the years, she also contributed her volunteer efforts to the Shelby County Republican Party and the Self Shelbyville Boys and Girls Club. She was a gifted homemaker and housekeeper who was relentlessly and completely devoted to her family. Visitation will be from 4:00 to 9:00 p.m. with the Rosary at 3:30 on Thursday, December 20 at Freeman Family Funeral Homes and Crematory, Carmony-Ewing Chapel, 819 S. Harrison St. in Shelbyville. A funeral mass will be held at 3 p.m. on Friday, December 21 at St Joseph Catholic Church 125 E. Broadway St. in Shelbyville. Interment will follow at St Joseph Cemetery in Shelbyville. The Hartnett family wishes to extend its sincere appreciation to The St Paul Hermitage for its outstanding care and compassion during the course of Irene’s four years of residence. Memorial contributions may be made to the Self Shelbyville Boys and Girls Club, 710 South Miller Street. Shelbyville, Indiana 46176. Online condolences may be shared with the family at www.freemanfamilyfuneralhomes.com.
To order memorial trees or send flowers to the family in memory of Irene Louise (Rusch) Hartnett, please visit our flower store.