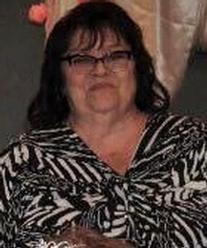 Janet Marie DePrez, 64, of Nineveh, passed away Tuesday, February 20, 2018 at Franciscan St. Francis Health in Indianapolis. She was born September 10, 1953, in Lebanon, the daughter of Carl and Lillian (Bowden) Scherer. On October 19, 1979, she married Donald DePrez, and he survives. In addition to Donald, Janet is survived by her sons, Chuck DeLong and wife, Alyce, and Carl DeLong, both of Indianapolis, and Eric DePrez of Nineveh; daughter, Sandy DePrez of Indianapolis; sister, Nancy Scherer of Nineveh; grandchildren, James, Jeremy and wife, Brandii, Autumn and husband, Eddie, Kyle, Nathan, Rachel, Belle, Zinnia, Jeevan, Terra, Adam, Emily, Celeste and Dustin; great-grandchildren, Justice, Jonathan and Ben; father-in-law, Edmund DePrez of Greenfield. Janet was preceded in death by her parents; and her mother-in-law, Catherine DePrez. She graduated from Lawrence Central High School in 1972 and received her bachelors degree in dietary management from Penn State. Janet was a member of the Church of Jesus Christ of the Latter Day Saints. She worked as a care partner and in the dietary department of Columbus Regional Hospital for 10 years. Janet cherished the time she spent with her grandchildren and family. Private family services will be observed. Services have been entrusted to Freeman Family Funeral Homes and Crematory, 819 S. Harrison St. in Shelbyville. Online condolences may be shared with Janet’s family at www.freemanfamilyfuneralhomes.com.
To order memorial trees or send flowers to the family in memory of Janet Marie DePrez, please visit our flower store.