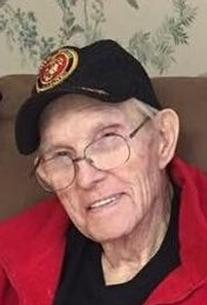 J.C. Bartley, 90, of Fairland, passed away Wednesday, August 9, 2017 at Homeview Health and Rehab in Franklin. He was born November 21, 1926, in Monroe County, Kentucky, the son of Herman and Myra Jane (Rush) Bartley. On March 8, 1947, he married LaVene Walden, and she preceded him in death on February 15, 1959. On March 11, 1960, he married Barbara Sharp, and she survives. J.C. is also survived by his daughters, Terri McClain and husband, Herb, and Tonie Barrett and George Wilson, both of Fairland; son, B.K. Bartley of Baltimore, Maryland; sister, Lillian Thomas of Bluff City, Tennessee; grandchildren, Kristoffer McClain, Theresa McClain, Anna Barrett, Adam Barrett and fiancé, Taylor Lile and Adrien Barrett; great-grandchildren, Katherine McClain, Rachel McClain and Ezra Barrett; and several nieces and nephews. He was also preceded in death by his parents; brothers, Charles “Charlie” Bartley, James “Jamie” Bartley and Hugh Rush. J.C. was a U.S. Marine Corp veteran, serving during World War II and the Korean Conflict. He retired as the plant superintendent at RCA, with over 30 years of service. J.C. enjoyed gardening and working in his yard. He loved to spend time with his family. A gathering of friends will be from 9 to 11 a.m. Saturday, August 19, 2017 at Freeman Family Funeral Homes and Crematory, Carmony-Ewing Chapel, 819 S. Harrison St. in Shelbyville. A memorial service will be at 11 a.m. Saturday at the funeral home, with military rites conducted by the local military committee. Memorial contributions may be made to the donor’s choice of charity. Online condolences may be shared with J.C.’s family at www.freemanfamilyfuneralhomes.com.
To order memorial trees or send flowers to the family in memory of J.C. Bartley, please visit our flower store.