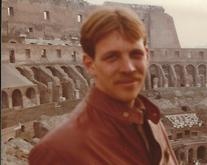 Jerome Farrell Dobbs, 61, of Shelbyville passed away Wednesday, March 18, 2020 at his home. He was born September 7, 1958, in Ashville, North Carolina, the son of Farrell H. and Joyce M. (Jolley) Dobbs. Jerome is survived by his daughter, Shawna L. Dobbs of Phoenix, Arizona; and brothers, Jeffrey S. Dobbs and wife, Terry, of Mooresville, and Jonathan E. Dobbs and wife, Susan, of Fort Wayne. He was preceded in death by his parents. Jerome graduated in 1976 from Bloomington North High School. He was a member of the Bloomington Baptist Church. Jerome was a U.S. Army veteran from 1981 to 1984. He was employed as a truck driver for Quickway Carriers, for the past 12 years. Jerome enjoyed riding bicycles and motorcycles. Private services will be held by the family. Services have been entrusted to Freeman Family Funeral Homes and Crematory, Carmony-Ewing Chapel, 819 S. Harrison St. in Shelbyville. Memorial contributions may be made to the Wounded Warrior Project, PO Box 758517, Topeka, Kansas 66675. Online condolences may be shared with Jerome’s family at www.freemanfamilyfuneralhomes.com.
To order memorial trees or send flowers to the family in memory of Jerome Farrell Dobbs, please visit our flower store.