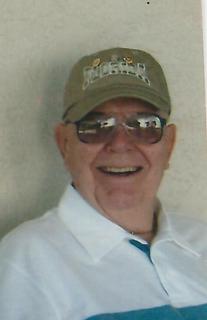 Jesse Gene Reed, 90, of Shelbyville, passed away Tuesday, September 26, 2017 at his residence. He was born December 23, 1926, in Shelby County, the son of Eklar and Emma (Hendrickson) Reed. On October 22, 1971, he married E. Patrice “Pat” Fisher, and she preceded him in death on December 17, 2007. He married Betty Lou Huffman on December 23, 2008, and she survives. In addition to his wife, Jesse is survived by step-daughters, Judy Settles and husband, Tom, of Shelbyville, Teresa Harris of Beech Grove, and Bonnie Cole and husband, Speedy, of Fairland; step-sons, Butch Bragg and wife, Shelly, of Plainfield and Doug Schantz of Louisville, Kentucky; 16 grandchildren; and several great-grandchildren. Jesse was also preceded in death by his parents; daughter, Sandy Mahin; and son, Michael Reed. He was a member of the Evangelical United Church of Christ. Jesse was a U.S. Navy veteran, serving during World War II. He was formerly a police officer for the City of Shelbyville, and retired from Chrysler Corporation in 1989, with 36 years of service. Jesse was also a member of American Legion Post No. 70, St. Bartholomew Council No. 295 and Shelby Lodge No. 28, Shelby County York Right, Scottish Rite, Baldwin Commandery No. 2 Knights Templar in Fairland, and Perpetual Life Member of General Grand Chapter, Royal Arch Masons, International. He was an avid golfer. Visitation will be from 4 to 8 p.m. Friday, September 29, 2017 at Freeman Family Funeral Homes and Crematory, Carmony-Ewing Chapel, 819 S. Harrison St. in Shelbyville, with Masonic ritual at 7:30 p.m. Funeral services will be at 2 p.m. Saturday, September 30, 2017 at the funeral home, with military rites by the local military committee. Online condolences may be shared with Jesse’s family at www.freemanfamilyfuneralhomes.com.
To order memorial trees or send flowers to the family in memory of Jesse Gene Reed, please visit our flower store.