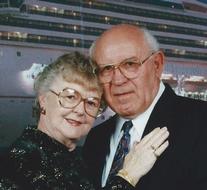 John Preidt, Jr. died on September 13, 2017 at Our Hospice of South Central Indiana in Columbus. He leaves behind sons, John K. (Julie) Preidt and Alan Dagley and daughters Kay (Tom) Campbell, Cheryl (Ray) Akers and Dawn Rutherford as well as many greatly loved grandchildren, great-grandchildren and great-great-grandchildren. Preceding him in death was his beloved wife, Barbara, daughter, Peggy A. Wright, son, James J. Preidt and grandson, Doug Campbell. John was born October 24, 1936 in Draas, Romania the son of Eszter and John Preidt, Sr. He came to the United States with his family in 1951, sponsored by the First Presbyterian Church, Shelbyville, Indiana and became a U.S. citizen in 1957. John lived a full and remarkable life. He and his family ran a small local restaurant, The Teepee. He traveled about the U.S. living in Florida, Texas and Georgia where he got his start in the building and property management business. A highlight while in Florida was helping to renovate the Orange Bowl in Miami and meeting Coach Don Shula. Upon returning to Shelbyville, he started a land development company with some of his friends in 1979 beginning with building and operating mini-warehouses, they soon began spreading out into the building and managing of apartment complexes and condominiums in Shelbyville, Franklin and Indianapolis. The business is still thriving today and is a living testament to the hard work and passion of John, his friends and his family. Visitation will be from 2 to 6 p.m. Sunday, September 17, 2017 at Freeman Family Funeral Homes and Crematory, Carmony-Ewing Chapel, 819 S. Harrison St. in Shelbyville. Funeral services will be at 10 a.m. Monday, September 18, 2017 at the funeral home. Interment will be at Forest Hill Cemetery in Shelbyville. Memorial contributions may be made to Our Hospice of South Central Indiana, 2626 17th St., Columbus, Indiana 47201. Online condolences may be shared with John’s family at www.freemanfamilyfuneralhomes.com.
To order memorial trees or send flowers to the family in memory of John Preidt, Jr., please visit our flower store.