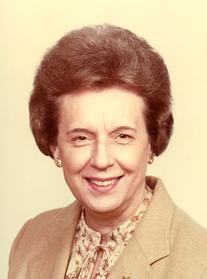 Josephine M. “Jo” Webster, 92, of Shelbyville, passed away Monday, March 27, 2017 at her residence. She was born December 19, 1924, in Shelby County, the daughter of the late William Roscoe and Alma (Isley) Webster. Jo is survived by nephews, Bill Webster of Sarasota, Florida, Steve Webster of Pittsburgh, Pennsylvania, Mike Schantz of Waldron, and Don Fisher of Shelbyville; nieces, Margaret Ann Carmony of Westfield and Lavonne Linville of Milroy; special friends, Jerry and Tammy Headlee of Shelbyville; and several great-nieces and nephews. Also preceding her in death were her sisters, Lillian Price, Marilyn Schantz-Six, Evelyn Smith, Mildred Fisher and Alice Stein; brother, William E. Webster; close friend, Divetta Shadley; and beloved pets, Blue Chip and Riley. She was a member of First Baptist Church. Jo graduated from Shelbyville High School and did special studies at the New York Institute of Finance and the University of Virginia, where she attained the designation of Chartered Financial Analyst. She was a past president of the Indianapolis Society of Financial Analysts and of the National Association of Bank Women, which promoted the careers of over 30, 000 women bank officers in the United States and Canada. Jo was a member of the Indianapolis Society of Financial Analysts, the Association of Investment Management and Research and of Financial Women International. Governor Otis T. Bowen named her a Sagamore of the Wabash in 1980. Jo entered the financial field in 1958, as an Investment Research Analyst for a large Midwest investment banking firm. She joined American Fletcher National Bank in 1968, where she was named one of the first two women Vice Presidents. After it merger with Bank One, she was a Vice President in charge of Equity Research and Personal Investment Services. She also served as Manager of the Personal Trust Division’s Trust Administration and Probate Department. Jo retired in 1994, as a Senior Investment Portfolio Manager from the national group of Bank One Investment Advisors. Private graveside services will be held at Forest Hill Cemetery in Shelbyville. Memorial contributions may be made to Shelbyville-Shelby County Animal Shelter, 705 Hale Road, Shelbyville, Indiana 46176.
To order memorial trees or send flowers to the family in memory of Josephine M. "Jo" Webster, please visit our flower store.