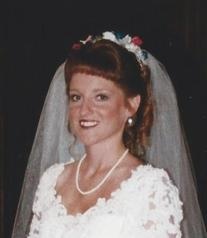 Kelly Renae Strange, 45, of Fairland passed away Monday, September 9, 2019 at her residence. She was born January 16, 1974, in Columbus, the daughter of Randall and Penny (Hyden) Merideth. On June 27, 1998, she married Steven Eugene Strange, and he survives. In addition to Steven, Kelly is survived by her mother and step-father, Rick Salinas, of Elizabethtown; daughter, Alyssa Strange of Fairland; step-sons, Steven A. Strange and wife, Tanya, and Zachary R. Strange, both of Fairland; sister, Amy Girdler of Shelbyville; grandchildren, Haylee Marie Strange and Mason Andrew Strange; grandfather, Kenneth Merideth and wife, Vera, of Taylorsville; step-grandfather, Robert Adams of Edinburgh; nieces and nephews, Chelsae Girdler and husband, Jake McLane, Jennah Tennell and husband, Cole, and Tessa Girdler. She was preceded in death by her father. Kelly attended Northwood United Christian Church. She graduated in 1992 from Southwestern High School and attended Ivy Tech in Columbus. Kelly loved cats and had a big heart for animals. She supported IndyFeral of Indiana (F.A.C.E.) Visitation will be from 2 to 6 p.m. Saturday, September 14, 2019 at Freeman Family Funeral Homes and Crematory, Carmony-Ewing Chapel, 819 S. Harrison St. in Shelbyville. Memorial contributions may be made to F.A.C.E., 1505 Massachusetts Avenue, Indianapolis, Indiana 46201. Online condolences may be shared with Kelly’s family at www.freemanfamilyfuneralhomes.com.
To order memorial trees or send flowers to the family in memory of Kelly Renae Strange, please visit our flower store.