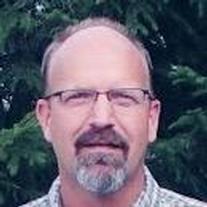 Kevin Joseph McCarty, 56, of Morristown, passed away Saturday, June 17, 2017 at Indiana University Health Methodist Hospice in Indianapolis. He was born April 11, 1961, in Indianapolis, the son of David L. and Mary T. (Lenehan) McCarty. Kevin is survived by his mother of Indianapolis; son, Kyle J. McCarty and wife, Rhiannon of Dallas, Texas; brothers, Michael McCarty and wife, Debbie, of Greenwood, Denny McCarty and wife, Kris, of South Bend, David McCarty and wife, Tiffany, of New Palestine, and Tom McCarty and wife, Laura, of Indianapolis; sister, Katie McCarty of Greenwood; a granddaughter, Cora McCarty of Dallas; and several nieces and nephews. He was preceded in death by his father. Kevin graduated from John Marshall High School in Indianapolis in 1979. He worked at Kroger for 30 years as a clerk, the last 12 years, he worked at the Rushville store, retiring in June of 2015. Kevin enjoyed running, tennis and any other outdoor activity. He especially loved spending time with his granddaughter, Cora. Visitation will be from 10 a.m. to noon, Wednesday, June 21, 2017 at Freeman Family Funeral Homes and Crematory, Frazier Chapel, 124 E. North St. in Morristown. Funeral services will be at noon Wednesday at the funeral home. Interment will be at Asbury Cemetery in Morristown. Memorial contributions may be made to Riley Children’s Hospital, 30 S. Meridian St., Suite 200, Indianapolis, Indiana 46204 or A.L.S. Foundation, 6525 S. 82nd St., Suite 115, Indianapolis, Indiana 46250-1545. Online condolences may be shared with Kevin’s family at www.freemanfamilyfuneralhomes.com.
To order memorial trees or send flowers to the family in memory of Kevin Joseph McCarty, please visit our flower store.