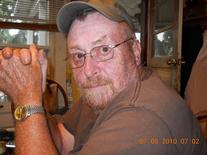 Larry Gene Theobald, 74, of Shelbyville, passed away Tuesday, October 12, 2021, at MHP Medical Center in Shelbyville. He was born August 9, 1947, in Indianapolis, the son of R. Eugene “Gene” and Louise M. (Arnold) Theobald. On April 3, 1981, he married his wife of 40 years, Sue Ann Cowen, and she survives. In addition to Sue, Larry is survived by his daughter, Victoria Theobald of Shelbyville; sister, Barbara Walton of Shelbyville; grandson, Sidney Edward; and nephews, Chuck Walton and wife, Anita and Bobby Walton. He was preceded in death by his parents; infant brother, Hubert Lawrence Theobald; and brother-in-law, Stanley Walton. Larry graduated in 1965 from Manilla High School. He was a member of the former Homer Christian Church. Larry and his father formerly owned and operated Kelley Wiring, retiring in 1998. He was a U.S. Army veteran, serving during the Vietnam Era. Larry enjoyed going camping and fishing, and mowing his yard. He loved his family and cherished the time he spent creating memories with them. Larry also leaves behind his dog, Captain. A Celebration of Larry’s life will be held at the VFW, 1622 IN-44 in Shelbyville. Services have been entrusted to Freeman Family Funeral Homes and Crematory, 819 S. Harrison St. in Shelbyville. Memorial contributions may be made to the Richard L. Roudebush VA Medical Center, 1481 W. 10th St., Indianapolis, Indiana 46202 Online condolences may be shared with Larry’s family at www.freemanfamilyfuneralhomes.com.
To order memorial trees or send flowers to the family in memory of Larry Gene Theobald, please visit our flower store.