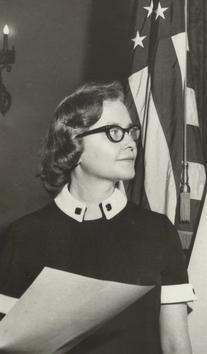 Loretta Meloy died peacefully on Tuesday, June 8, 2021, in Shelbyville at the age of 97. A lifelong resident of Shelbyville, Mrs. Meloy was a prominent local attorney for many years and served as the last City Judge in Shelbyville. She also was an avid swimmer and swam laps daily for many years at the IU Natatorium in Indianapolis. Loretta Meloy was born April 26, 1924 in Shelbyville and was the elder daughter of Conrad and Anna Schrader who had immigrated to Shelbyville from Neiderurff, Germany. Mrs. Meloy graduated from Shelbyville High School where she was a violinist in the orchestra, received the Business and Professional Women’s Award, and was a member of the National Honor Society. Mrs. Meloy attended the Indiana University in Bloomington where she received a BS in Accounting, was elected to the Beta Gamma Sigma national honor society, and studied the pipe organ. After college, she was the organist at the First Evangelical and Reformed Church (now the Evangelical United Church of Christ) in Shelbyville during the 1950’s. While Loretta assisted her husband Harold Meloy’s law practice, she obtained her law degree from IU in Indianapolis. She then joined with Harold in the law firm of Meloy & Meloy in Shelbyville for many years. Mrs. Meloy was a member of the Indiana State Bar Association, the Indianapolis Bar Association, and was admitted to practice before the United States Supreme Court. She served as Shelbyville’s last City Judge in the early 1970’s and was one of the earliest female judges in Indiana. Loretta and Harold prominently supported the arts and historical activities in Shelby County. She was preceded in death by her husband, Harold; and her sister, Mary Ann Williams. She is survived by her nephews, Mark Williams and wife, Celeste of Orange, Texas and Kristofer Williams of Toledo, Ohio; her niece, Ann Huffman and husband, Keith, great nephew, Justin Huffman, and great niece, Kirsten Huffman, all of Broomfield, Colorado. Visitation will be from 10:30 to 11:30 a.m. Saturday, June 19, 2021, at Freeman Family Funeral Homes and Crematory, Carmony-Ewing Chapel, 819 S. Harrison St. in Shelbyville. Funeral services will be at 11:30 a.m. Saturday at the funeral home, with Rev. Alecia Gross officiating. Interment will be at Forest Hill Cemetery in Shelbyville. Online condolences may be shared with Loretta’s family at www.freemanfamilyfuneralhomes.com.
To order memorial trees or send flowers to the family in memory of Loretta Meloy, please visit our flower store.