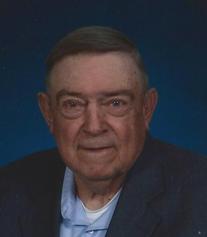 Mahlon Gene Trimnell, 86, of Flat Rock, passed away Thursday, May 3, 2018 at his residence. He was born February 27, 1932, in Bartholomew County, the son of George W. and Ollie E. (Cooper) Trimnell. On March 30, 1958, he married his wife of 60 years, Norma Ruth Mohr, and she survives. In addition to Norma, Mahlon is survived by his daughter, Mary Ruth Trimnell of West Des Moines, Iowa; son, Roger Trimnell and wife, Angie, of Waldron; and grandchildren, Abbi Nicole Trimnell and Ryan Gene Trimnell. He was preceded in death by his parents; and daughter, Brenda Marlene Trimnell. Mahlon graduated from Waldron High School in 1950. He was a U.S. Army veteran, serving during the Korean War from 1953 to 1955. Mahlon was a member of Lewis Creek Baptist Church. He was a lifelong farmer. Mahlon was gifted with the talent of playing the piano, organ and accordion. He enjoyed playing special songs at church and was known for playing a wonderful rendition of “When The Saints Go Marching In”. He and his mother would play beautiful duets. Mahlon was also “Honey” of the kitchen band, Honey and The Hot Biscuits. Visitation will be from 4 to 8 p.m. Tuesday, May 8, 2018 at Freeman Family Funeral Homes and Crematory, Carmony-Ewing Chapel, 819 S. Harrison St. in Shelbyville and from 9:30 to 10 a.m. Wednesday, May 9, 2018 at Lewis Creek Baptist Church, 1400 E 600 S, Waldron, IN 46182. Funeral services will be at 10 a.m. Wednesday at the church, with Pastor Harvey Taylor officiating. Interment will be at Lewis Creek Baptist Cemetery in Shelby County, with military graveside rites conducted by the local military committee.. Memorial contributions may be made to Lewis Creek Baptist Church Building Fund or the Salvation Army, 150 E. Washington St., Shelbyville, Indiana 46176. Online condolences may be shared with Mahlon's family www.freemanfamilyfuneralhomes.com.
To order memorial trees or send flowers to the family in memory of Mahlon Gene Trimnell, please visit our flower store.