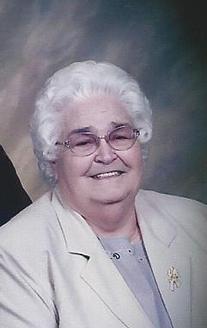 Margaret “Marciel” Lane, 93, of Indianapolis passed away Sunday, November 3, 2019 at American Village in Indianapolis. She was born October 25, 1926, in Greenwood. In 1944, she married George Lane, and he preceded her in death in March of 2006. Marciel is survived by her daughter, Vicky Lane of Indianapolis; daughters-in-law, Roseann Lane of Bloomington and Rosalie Lane of Wilmington, Ohio; five grandchildren; several great-grandchildren; numerous nieces and nephews including Lana Blake and Lora Butner; and adopted daughter, Kay Buehrer of Indianapolis. She was preceded in death by her parents; sons, Bill Lane and Richard Lane; three sisters; a brother; and several brothers-in-law and sisters-in-law. Marciel graduated in 1944 from Whiteland High School. She was a member of Evangelical Methodist Church in Shelbyville. Marciel retired from Northwestern Schools in 1991, where she was a cook and custodian. She enjoyed cooking and making candy. Visitation will be from 1 to 3 p.m. Saturday, November 9, 2019 at Freeman Family Funeral Homes and Crematory, Carmony-Ewing Chapel, 819 S. Harrison St. in Shelbyville. Funeral services will be at 3 p.m. Saturday at the funeral home, with her grandson, Pastor Doug Lane officiating. Interment will be at Boggstown Cemetery. Memorial contributions may be made to the IndyHumane, 7929 N. Michigan Road, Indianapolis, IN 46268. Online condolences may be shared with Marciel’s family at www.freemanfamilyfuneralhomes.com.
To order memorial trees or send flowers to the family in memory of Margaret "Marciel" Lane, please visit our flower store.