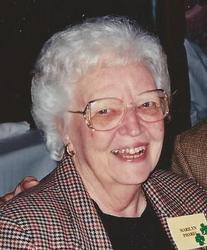 Marilyn Elizabeth Phares, 93, formerly of Shelbyville, passed away Sunday, March 27, 2022, in Bloomington, where she had lived for the past three and one half years. She was born on January 31, 1929, in Shelbyville, the daughter of Henry Adolph Wendelboe and Wilburta Agnes (Garlitch) Wendelboe Eads. On March 22, 1947, she married Robert E. Phares, and he preceded her in death on November 3, 2013. Marilyn is survived by her sons, John R. Phares (Connie), of Bloomington, and James W. Phares (Rick), of Indianapolis; step-grandchildren, Michelle (Eaton) Nolley (Gary) and Michael Eaton (Mandi); step-great-grandchildren, Matt Nolley, Heather (Nolley) Wilson (Jared), Ashley (Nolley) Livezey (Andrew), Jackson Eaton, Sydney Eaton, Trenton Eaton and Camden Eaton; and twin step-great-great-grandchildren, Mason Wilson and Lauren Wilson. She is also survived by three sisters-in-law; two brothers-in-law; and several nieces and nephews. In addition to Robert, Marilyn was preceded in death by her parents; step-father, Arnold Eads; brother, Richard Wendelboe; and step-brother, Donald Eads. Marilyn graduated from Shelbyville High School. She was a long-time member of First Presbyterian Church. Marilyn formerly worked as a secretary for Shelbyville Jr. High School and the Shelby Desk Company, retiring in 1991. She was a 75-year member and past matron of the Naamah Chapter No. 73 Order of Eastern Star. Marilyn was also a member of Job’s Daughters, past president of Mary Mott Green Daughters of the American Revolution and past president of the Diligent Diggers Garden Club. Visitation will be from 10 to 11 a.m. Saturday, April 2, 2022, at Freeman Family Funeral Homes and Crematory, Carmony-Ewing Chapel, 819 S. Harrison St. in Shelbyville. Funeral services will be at 11 a.m. Saturday at the funeral home. Interment will be at Forest Hill Cemetery in Shelbyville. Memorial contributions may be made to the First Presbyterian Church, 124 W. Broadway St., Shelbyville, Indiana 46176. Online condolences may be shared with Marilyn’s family at www.freemanfamilyfuneralhomes.com.
To order memorial trees or send flowers to the family in memory of Marilyn Elizabeth Phares, please visit our flower store.