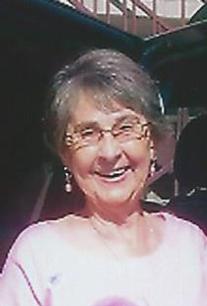 Mary F. Jones, 83, of Shelbyville passed away Thursday, July 19, 2018 at her residence. She was born April 2, 1935, in Solsberry, the daughter of Carl and Mary (Bell) Adams. On May 27, 1955, she married Allen Jones, and he preceded her in death on August 13, 1995. Mary is survived by her daughters, Lisa Bright and husband, Chris, and Karen Jones, both of Shelbyville, Kathy Moore and husband, Gerald, of Mansfield, Texas, April Clark and husband, Jerry, of Indianapolis, and Leeann Turner and husband, Gary, of Greencastle; son, Rik Jones and wife, April, of Fairland; 14 grandchildren; three great-grandchildren; and numerous nieces and nephews. In addition to Allen, Mary was preceded in death by her parents; and sisters, Helen, Olive, Martha, Joella, Thelma and Charity; and brothers, Arthur, Tilford, Earl, John, Forest and Ernest. Mary graduated from Solsberry High School in Greene County in 1953. She enjoyed crocheting, tending to her flowers and was an avid Elvis fan. Visitation will be from 11 a.m. to 1 p.m. Tuesday, July 24, 2018 at Freeman Family Funeral Homes and Crematory, Carmony-Ewing Chapel, 819 S. Harrison St. in Shelbyville. Funeral services will be at 1 p.m. Tuesday at the funeral home. Interment will be at Fairland Cemetery in Fairland. Memorial contributions may be made to the Cancer Association of Shelby County, P.O. Box 844, Shelbyville, Indiana 46176. Online condolences may be shared with Mary’s family at www.freemanfamilyfuneralhomes.com.
To order memorial trees or send flowers to the family in memory of Mary F. Jones, please visit our flower store.