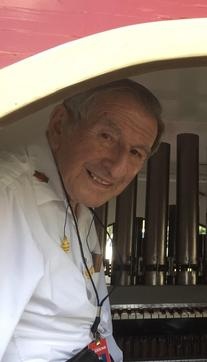 Maurice Finkel, 97, passed away on October 30, 2020. He was born in Montreal, Quebec, Canada on July 22, 1923. He was the son of Benjamin and Jessie Finkel. Maurice attended Baron Byng High School in Montreal and was a design draftsman for Canadian Vickers (later Fairchild and Canadair) Aircraft after graduating. During WWII he was assigned by Canadair to Douglas Aircraft in Santa Monica, California. He worked on the Beaufort and Bolingbroke (Blenheim) Bombers as well as the PBV-1 Canso (Consolidated PBY Catalina) being built under license. He was proud of designing the overhead cockpit window seal in the PBV and had several test flights from the St. Lawrence River. After the War he started selling auto parts in Canada for Lion Auto Parts, Chicago. He covered Quebec and the Maritime Provinces. In 1948 he took a territory in the United States calling on customers in Indiana, Kentucky, and West Virginia. The company later became C. Mills Automotive. In 1969 Maurice started National Automotive Lines. He spent his career in auto parts. He later specialized in standard transmission parts and distributed his transmission kits through Blue River Supply. He worked until his death. Maurice received numerous awards and recognitions including Master Pilot status by the FAA for over 50 years of safe flying. He soloed in April 1946 in a Fleet Model 7 and went on to fly over 40 aircraft types including aerobatics. He was the glider tow pilot in a Tiger Moth for the Montreal Glider Club. Maurice was an honorary life member of the Indiana University Alumni Association, a Kentucky Colonel, and attended Indianapolis Hebrew Congregation. He was a member of the Elks Club and Exchange Club. Maurice spoke fluent English, French, and Yiddish. Maurice, along with his wife Carol, was a founding member of the Shelby Community Band and the Shelby Arts Council. He was active in Music Study Club and Community Concerts. He continued to play clarinet in the Shelby Community Band. Maurice played his circus calliope in parades. He performed 28 years at the Indiana State Fair tractor parade and many local and regional parades and festivals. He loved sharing his music. Maurice married Carol Lee Drevno and the couple raised four children. Cydney (Joel) Fox, Sondra (Andy) Fogle, Kenneth (Ann) Finkel, and David (Sarah) Finkel. He leaves behind 9 grandchildren and 5 great-grandchildren. He will be missed by his special friend Mariá del Pilar Penas Aldrey of Spain. He was preceded in death by his beloved wife, parents, 3 brothers, and daughter Sondra. He was naturalized as an American citizen in 1961. Calling will be held at Freeman Family Funeral Home at 819 S. Harrison Street. Calling will be from 4pm - 8pm on Monday, November 2, 2020. The graveside service and burial will be at 10am Tuesday, November 3, at the Indianapolis Hebrew Congregation Cemetery, 1300 E 161st St, Westfield, IN. Donations may be made to the Finkel Family Fund, c/o Blue River Community Foundation, 54 W. Broadway St, Shelbyville, IN 46176.
To order memorial trees or send flowers to the family in memory of Maurice Finkel, please visit our flower store.