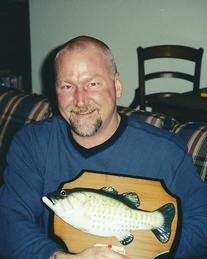 Michael Joseph Coyle, age 54, of Indianapolis, passed away Monday, August 28, 2017 in Bath Springs, Tennessee. He was born January 5, 1963, in Indianapolis, the son of Donald L Coyle and Marianne (Pranger) Coyle Smalley. Mike is survived by his mother, Marianne Coyle Smalley and husband Ron of Morristown; son Zane Coyle of Southport; daughter, Rhianna Abel of Brazil; brothers, Jeffery Coyle and wife, Jennie, of Grand Bay, Alabama, and Douglas Coyle and wife, Amy of Morristown; and several nieces, nephews, cousins, aunts and uncles. His father preceded him in death. Michael was an award winning custom painter of motorcycles and cars. He was known in Indianapolis as “Motorcycle Mike”. His hobbies included fishing and hunting. A celebration of Michael’s life will be at 11:00 a.m. Saturday, September 30th, 2017 at The Fountain (Church), 797 W. Brookville Road in Fountaintown, and friends may gather one-half hour prior. Online condolences may be shared with Michael’s family at www.freemanfamilyfuneralhomes.com
To order memorial trees or send flowers to the family in memory of Michael Joseph Coyle, please visit our flower store.