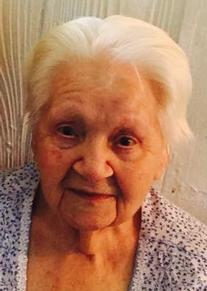 Mildred E. Copple, 95, of Fountaintown, passed away Monday, August 7, 2017 at Morristown Manor in Morristown. She was born March 20, 1922, in Scott County, the daughter of Virgil and Edith (Sipe) Everhart. On September 10, 1940, she married Eugene Copple, and he preceded her in death on September 26, 1984. Mildred is survived by her sons, Steve Copple of Mesquite, Nevada, Mike Copple and wife, Donna, of St. Augustine, Florida, and Jerry Dalton of Shelbyville; daughter, Joan Carmichael and husband, Dennis, of Knightstown; daughter-in-law, Jan Copple of Morristown; sister, Sherolyn Ross of Avon; granddaughters, Dawn O’Connor, Deneen Lucchessi and Kelly Turner; great-grandchildren, Mark O’Connor, Molly Locke, Michelle Turner, Rachel Turner and Stephen Turner; and several nieces and nephews. She was also preceded in death by her sons, Dannie Copple and Stanley Wayne Copple; brothers, Jim Everhart, Harold Everhart, Bob Everhart and Harry Everhart. Mildred graduated from Morristown High School in 1940. She was a member of Mount Lebanon Church, where she was in the ABC Club. Mildred enjoyed fellowshipping with the congregation at Willow Branch Church. Mildred was a housewife and mother to over 35 foster children, her family connections with her foster children continued on to their children and grandchildren. She formerly worked at the original Kentucky Fried Chicken in Morristown, now known as the Bluebird Restaurant. Mildred was a member of the Hancock County Home Extension Club. Visitation will be from 1 to 3 p.m. Friday, August 11, 2017 at Freeman Family Funeral Homes and Crematory, Frazier Chapel, 124 E. North St. in Morristown. Graveside services will be at 3:15 p.m. Friday at Asbury Cemetery in Morristown. Memorial contributions may be made to Asbury Cemetery, PO Box 609, Morristown, Indiana 46161. Online condolences may be shared with Mildred’s family at www.freemanfamilyfuneralhomes.com.
To order memorial trees or send flowers to the family in memory of Mildred E. Copple, please visit our flower store.