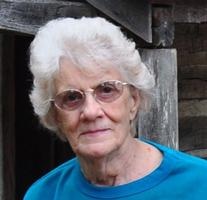 Mildred Irene Douglas, 80, of Shelbyville, a lifelong area resident, passed away Wednesday, November 01, 2017 at her home after a long illness. She was born May 19, 1937, in Shelby County, the daughter of Clarence E. and Myrtle A. (Barger) Betts. On July 10, 1954, she married Donald E. Douglas, and he preceded her in death on May 4, 2004 (a few months shy of their golden wedding anniversary). Mildred is survived by her daughter, Lori Nelson and husband, Chance, of Noblesville; son, Terry Douglas; sisters, Jeanne Nickel of Morristown and Mabel Hughes of Indianapolis; and her grandchildren whom she absolutely loved being a loving and doting grandmother to, Kayla Jackson of McCordsville; and Nic Nelson of Noblesville. She was also preceded in death by her parents; brothers, Harold Betts, Dale Betts, James Betts and Roy Betts; and sister, Helen Lee. Mildred attended Shelbyville High School before earning her GED in the late 1970s. Before and after a cycle of being a homemaker and stay-at-home mom, things that gave her no small measure of pride, she endeavored in many occupations – a telephone operator, a co-owner of a diner restaurant with her husband, and an assistant manager of Mr. Video, to name a notable few. Mildred either attended or was a member of multiple area churches in her lifetime – First Baptist Church (of Shelbyville), Waldron Baptist Church, and most recently, Crossroad Community Church (of Shelbyville), among them. She was also a member of the American Legion Auxiliary and St. Joe Social Club. Mildred appreciated nature and animal life from an early age. Gardening, especially with flowers, was one of her greatest and most enduring hobbies/interests, both from the ‘green thumb’ of her own hand as well as the efforts of others. She was an avid country, gospel, and early rock and roll music fan, and she ended up parlaying this passion into fun and fully engaged karaoke pursuits throughout her golden years. Mildred also enjoyed bird watching, reading (especially newspapers and magazines in her later years), doing jigsaw puzzles, watching game shows, and surfing the Internet, among other things. Visitation will be from 4 to 8 p.m. Monday, November 6, 2017 at Freeman Family Funeral Homes and Crematory, Carmony-Ewing Chapel, 819 S. Harrison St. in Shelbyville. Funeral services will be at 10 a.m. Tuesday, November 7, 2017 at the funeral home. Interment will be at Forest Hill Cemetery. Memorial contributions may be made to Alzheimer’s Association, Greater Indiana Chapter, 50 E. 91st St., Suite 100, Indianapolis, Indiana 46240. Online condolences may be shared with Mildred’s family at www.freemanfamilyfuneralhomes.com.
To order memorial trees or send flowers to the family in memory of Mildred Irene Douglas, please visit our flower store.