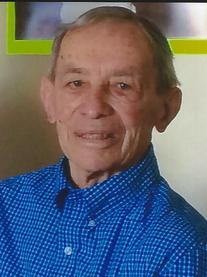 Morris W. Brown, 86, of Indianapolis, passed away Saturday, June 9, 2018 at his residence. He was born August 21, 1931, in Shelbyville, the son of Elbert and Blanche (Bush) Brown. On August 8, 1953, he married Beulah I. Shipp, and she preceded him in death on December 19, 2013. Morris is survived by his children, Michael Brown and wife, Sherill, of Fairland, Terri Simpson and husband, Mike, of Indianapolis, Morris “Sam” Brown and wife, Gaye, of Davenport, Florida, and Troy Brown and wife, Darlene, of Fountaintown; sister, Barbara Emmick of Greenwood; grandchildren, Natalie, Traci, Todd, Annalee, Andrew, Kyle, Andrea, Blaise and Cole; great-grandchildren, Ava, Elise, Kaleb, Lane, Nora, Finn, Owen, Maci, Isaac, Joshua, Audrey, Joseph and Anderson; and several nieces and nephews. In addition to Beulah, Morris was preceded in death by his parents; and brother, George Brown. He graduated from Moral Township High School in 1949. Morris was a veteran of the U.S. Navy. He was a member of Indiana Creek Christian Church. Morris began working in electronics at P.R. Mallory in Indianapolis, he then worked at Arvin in Columbus and retired in 1997 from Premier Stamping in Indianapolis. He enjoyed bowling, hunting and fishing, and often made his own fishing lures. He also enjoyed cutting wood for his own use, as well as selling it to others. One of Morris’ passions was slalom water skiing and teaching others to ski. He loved to spend time on the Ohio River at Vevay, calling it his “home away from home.” Morris last skied when he was in his seventies. He also leaves behind his dog, Lucy. Visitation will be from 4 to 8 p.m. Tuesday, June 12, 2018 at Freeman Family Funeral Homes and Crematory, Carmony-Ewing Chapel, 819 S. Harrison St. in Shelbyville. Funeral services will be at 10 a.m. Wednesday, June 13, 2018 at the funeral home, with Pastor Gary Johnson officiating, with military graveside rites conducted by the local military committee. Interment will be at Forest Hill Cemetery in Shelbyville. Memorial contributions may be made to the American Heart Association, 6100 W. 96th St., Suite 200, Indianapolis, Indiana 46278. Online condolences may be shared with Morris’ family at www.freemanfamilyfuneralhomes.com.
To order memorial trees or send flowers to the family in memory of Morris W. Brown, please visit our flower store.