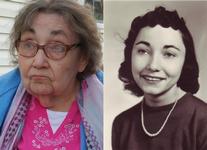 Nancy Annette Moore, 80, was born in Shelbyville, Indiana on March 16, 1938. She passed away and was reunited with her beloved parents on January 13, 2019. Nancy lived in Shelbyville her entire life and was the only child of Arthur Carl Poe and Margaret Elizabeth Poe. Growing up she helped her mother with office tasks for their business in Shelbyville, Art Poe’s Moving and Storage on Pike Street. She graduated from Shelbyville High School in 1956 and went on to marry James Franklin Moore in 1960. They had three children. She later worked in the banking industry and attended the University of Indianapolis. Nancy attended West Street United Methodist Church for many years along with her mother Margaret. She enjoyed crocheting and her many cats she had over the years. Nancy was preceded in death by her husband (James), mother (Margaret), father (Arthur), and a grandson (David). Nancy is survived by her daughter Victoria, son in law Jaime, and eldest son Robert who all cared for her during her final years. She is also survived by her youngest son Kenneth, three grandchildren (Stephen, Christopher, and Taylor) and one great grandchild (Brynn). Private graveside services will be observed, with arrangements being handled by Freeman Family Funeral Homes and Crematory, 819 S. Harrison Street in Shelbyville. Memorial contributions may by made to the Shelbyville-Shelby County Animal Shelter, 705 Hale Road, Shelbyville IN 46176
To order memorial trees or send flowers to the family in memory of Nancy Annette Moore, please visit our flower store.