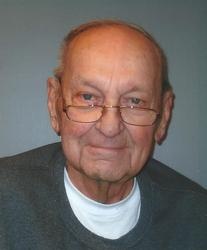 Ray Hasler Hartman, 85, of Shelbyville passed away Sunday, May 26, 2019 at Heritage House Convalescent Center in Shelbyville. He was born August 28, 1933, in Bluffton, the son of Edgar and Clyde (Linville) Hartman. On August 2, 1953, he married Janet Law, and she preceded him in death on June 7, 2017. Ray is survived by his son, James Hartman of Shelbyville; daughter, Susan Scales and husband, David, of Pensacola, Florida; grandchildren, Christopher A. Scales and wife, Kristen, and Candice Scales, all of Pensacola; great-grandson, Brayden Scales; brother-in-law, James R. Law and wife, Kathy, of Shelbyville; nephew, Phil Hartman and wife, Renee; and niece, Cindy Hartman. In addition to Janet, Ray was preceded in death by his parents; and brother, Robert Hartman. Ray graduated in 1952 from Fairland High School, and attended Tri-State University in Angola. He was a U.S. Army veteran, serving from 1953 to 1957, during the Korean Conflict. Ray worked for Hartman Brothers Construction Company from 1949 to 1971 and for Heritage Group Asphalt Materials from 1971 until retiring in 2001. He was formerly a member of Shelby Lodge No. 28 Masonic Lodge, Murat Shrine, Benevolent and Protective Order of the Elks, Shelbyville Lions and Alpha Gamma Epsilon. Visitation will be from 10 to 11:30 a.m. Saturday, June 1, 2019 at Freeman Family Funeral Homes and Crematory, Carmony-Ewing Chapel, 819 S. Harrison St. in Shelbyville. Funeral services will be at 11:30 a.m. Saturday at the funeral home, with Rev. Bill Horner officiating. Interment will be at Forest Hill Cemetery in Shelbyville. Memorial contributions McKay Manor Activities Department, 1473 E. McKay Road, Shelbyville, Indiana 46176. Online condolences may be shared with Ray’s family at www.freemanfamilyfuneralhomes.com.
To order memorial trees or send flowers to the family in memory of Ray Hasler Hartman, please visit our flower store.