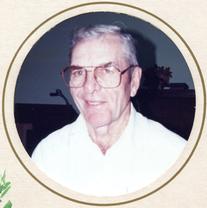 Ray R. Wilkins, 93, of Fountaintown, passed away Friday, April 28, 2017 at Cypress Run in Morristown. He was born July 2, 1923, in Moral Township, Shelby County, Indiana, the son of Rube E. and Blanche (Mohr) Wilkins. On June 23, 1943, he married his wife of 73 years, Irene (Baldwin) Wilkins, and she survives. Ray is also survived by his daughters, Judy Lynn Pauls and husband, Jerry, of Wanamaker, and Joy Luan Henson of Fishers; grandchildren, Tony Wray Titus and wife, Teresa, Stephen Ray Henson, Leigh Ann Smith and husband, Kerry, Ricky Jay Henson and wife, Marie, and Lori Lynn Shelton; 18 great-grandchildren; and four great-great-grandchildren. He was preceded in death by his parents; daughter, Janet Lee (Wilkins) Titus on February 22, 2011; and brother, Russ Wilkins. Ray graduated from Moral Township High School in 1941, where he was an excellent basketball player, winning the 1941 Shelby County Tourney. He was the last living member of his graduating class. He was a member of Pleasant View Baptist Church. Ray was a farmer. He also drove a school bus for 27 years for Moral Township and Triton Central schools. He enjoyed roller skating, bowling, dancing, singing and playing euchre. One of his pastimes was pulling horses. Ray and Irene enjoyed participating in parades with their horse and surrey. He loved to think of themes and characters for them to act out during the parades. Ray also drove numerous politicians in parades including, Senator Richard Lugar and Mayor Bill Hudnut. At the age of 88, he was still riding horses and rode in the Pleasant View parade in memory of his daughter, Janet. Visitation will be from 4 to 8 p.m. Wednesday, May 3, 2017 at Freeman Family Funeral Homes and Crematory, Carmony-Ewing Chapel, 819 S. Harrison St. in Shelbyville. Funeral services will be at 11 a.m. Thursday, May 4, 2017 at the funeral home. Interment will be at New Palestine Cemetery in New Palestine. Memorial contributions may be made to Pleasant View Baptist Church, 12442 Southeastern Avenue, Acton, IN 46259 or Shelbyville-Shelby County Animal Shelter, 705 Hale Road, Shelbyville, Indiana 46176.
To order memorial trees or send flowers to the family in memory of Ray R. Wilkins, please visit our flower store.