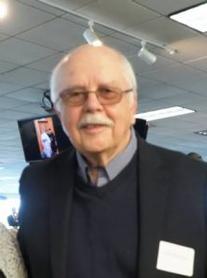 Richard Clyde Spencer “Dick” Bishopp, 81, of Shelbyville passed away Wednesday, January 16, 2019 at Franciscan St. Francis Health in Indianapolis. He was born January 23, 1937, in Richmond, the son of Richard Valentine and Nola Bess (Oler) Bishopp. On February 17, 1963, he married his loving wife of 55 years, Rebecca “Becky” Wilson, and she survives. In addition to Becky, Dick is survived by his daughters, Amy Bishopp of Trinidad, and Anne Bishopp and fiancee’, Roy Radloff, of Columbus, and their many international daughters; grandchildren, Nick Falzone of Indianapolis, Gavin Bishopp and Hannah Radloff, both of Columbus; sister-in-law, Betty Laughner and husband, Charles, of Indianapolis; brothers-in-law, Phil Wilson and wife, Barbara, of Arlington and Max Wilson and wife, Kitty Bo, of Mason, Texas; and several nieces and nephews. Dick was preceded in death by his parents; and sister, Nancy J. Bishopp. He graduated from Shelbyville High School in 1954. He went on to study at Indiana University, where he was a member of Delta Chi Fraternity. During his college years he and his fellow classmate, Tom Boyle, started their very own construction company. They constructed and sold a dog house or two. Soon Dick joined the U.S. Army, where he spent time at Fort Dix, New Jersey and during the Vietnam Conflict he “fought in the fighting finance” as he often referred to it. After IU and going to the Army, Dick went on to study business at the University of Bowling Green in Kentucky. He was a member of the First United Methodist Church and attended First Christian Church. Dick was a very dedicated and hard worker. Except for the occasional ski trips (which were usually no more than five days) he hardly ever missed a day of work. In fact, he was known to go in on his days off and in the evenings when store was closed. He did not hesitate to run over to a customer’s home to fix or check out something for them, even if it was in the middle of Christmas dinner. He leaves behind a wife he loved and adored for nearly 56 years. They not only lived and raised a family together, they worked side by side every day for the past 40 years. Dick was an amazing husband, son, brother and father. Dick was a member of the Benevolent and Protective Order of the Elks, and served as president of the Shelbyville Lions Club three times. He had formerly been the president and served on the Major Hospital board, and he had also served on the Shelby County Historical Society and Grover Museum boards. He loved his family and his community dearly. Dick and Becky loved to snow ski. With the support of their nephew, Doug Cassidy and long-time friend and employee, Dennis Wise, they were able to travel to Colorado, Canada, Maine, Vermont or Utah for their annual skiing trips. He also loved to canoe and was very adventurous, with family and friends down the Blue River. A Memorial Services will be at 2 p.m. Saturday, January 26, 2019 at the First Christian Church, 118 W. Washington St. in Shelbyville, and friends may gather one-half hour prior to the service. A Celebration of Dick’s life will follow at Maxim Events, 1415 E. Michigan Road in Shelbyville. Services have been entrusted to Freeman Family Funeral Homes and Crematory, 819 S. Harrison St. in Shelbyville. Memorial contributions may be made to the Lions Club International, 300 W. 22nd St., Oak Brook, IL 60523; Grover Museum, 52 W. Broadway St., Shelbyville, Indiana or the First Christian Church. Online condolences may be shared with Dick’s family at www.freemanfamilyfuneralhomes.com.
To order memorial trees or send flowers to the family in memory of Richard Clyde Spencer "Dick" Bishopp, please visit our flower store.