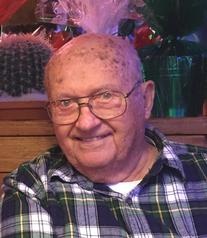 Richard “Dick” Olinger, 89, of Fairland passed away Saturday, July 13, 2019. He was born August 5, 1929, in Moral Township, Shelby County, Indiana, the son of Walter L. Olinger and Mary “Alberta” (Andrews) Woods. On December 14, 1949 in Wanamaker, he married his wife of nearly 70 years, Josephine A. “Jody” Moore, and she survives. In addition to Jody, Dick is survived by his sons, Robert L. Olinger of Shelbyville, and Tracy L. Olinger of Fairland; daughter, Terri L. Meal of Fairland; 14 grandchildren; 41 great-grandchildren; and ten great-great-grandchildren. Dick was preceded in death by his parents; step-father, Everett Woods; daughter, Karen L. Kremer; a great-grandson; a great-great-granddaughter; and a step-granddaughter. He graduated from Moral Township High School in 1947. Dick attended New Life United Methodist Church. He was a U.S. Veteran of the Naval Reserve, with nine years of service. Dick retired in 1987, after working for International Harvester “Navistar” in plant security for 25 years and the Chrysler Corporation for 10 years. He was a 60-year member of Sugar Creek Masonic Lodge F&AM No. 279, and American Legion Post No. 70. Dick enjoyed bowling, golfing and playing fast pitch softball. In his younger years, he enjoyed fishing and hunting. Visitation will be from 11 a.m. to 1 p.m. Saturday, July 20, 2019 at Freeman Family Funeral Homes and Crematory, Carmony-Ewing Chapel, 819 S. Harrison St. in Shelbyville. Masonic ritual will be recited at 1 p.m. Saturday, with the funeral service following at the funeral home. Interment will be at New Palestine Cemetery in New Palestine. Memorial contributions may be made to the Shriner’s Hospital, 3229 Burnet Avenue, Cincinnati, Ohio 45229-3018. Online condolences may be shared with Dick’s family at www.freemanfamilyfuneralhomes.com.
To order memorial trees or send flowers to the family in memory of Richard "Dick" Olinger, please visit our flower store.