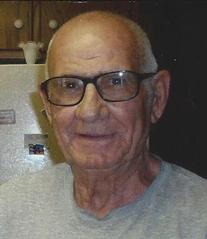 Robert D. “Bob” Theobald, 88, of Shelbyville, passed away Friday, January 5, 2018 at Heritage House of Shelbyville. He was born July 25, 1929, in Shelby County, the son of Earl A. and Sarah (Kuntz) Theobald. On October 9, 1954, he married his wife of 63 years, Janet L. Theobald, and she survives. In addition to Janet, Bob is survived by his sons, Jeff D. Theobald and wife, Cammy, of New Castle, and Thomas E. Theobald and wife, Lori, of Rockwell, North Carolina; daughter, Mary Ann West and husband, Jack, of Houston, Texas; grandchildren, Holly Nisley and husband, Todd, Amanda Brinker and husband, Steven, Dustin Theobald and wife, Elizabeth, Brittany Ross and husband, Caleb, Cortney Theobald, Jackie West, Taylor West and McKinzee Theobald; and eight great-grandchildren. Bob was preceded in death by his parents; brothers, Earl Theobald, Jr. and William Theobald; sister, Mary F. Braunaugel; and grandson, Justin Theobald. He graduated from Manilla High School in 1947. Bob was a U.S. Army veteran, serving during the Korean Conflict. He was a member of the West Street United Methodist Church and American Legion Post No. 70. Bob was a past member of the Eagles Lodge in Shelbyville and the Manilla Lions Club. He enjoyed gardening and working in his yard. One of Bob’s pastimes was mowing at the Shelby County Fairgrounds. Visitation will be from 10 a.m. to noon, Wednesday, January 10, 2018 at Freeman Family Funeral Homes and Crematory, Carmony-Ewing Chapel, 819 S. Harrison St. in Shelbyville. Funeral services will be at noon Wednesday at the funeral home. Interment will be at Zion United Church of Christ Cemetery, with military graveside rites conducted by the local military committee. Memorial contributions may be made to the Alzheimer’s Association, Greater Indiana Chapter, 50 E. 91st St., Suite 100, Indianapolis, Indiana 46240. Online condolences may be shared with Bob’s family at www.freemanfamilyfuneralhomes.com.
To order memorial trees or send flowers to the family in memory of Robert D. "Bob" Theobald, please visit our flower store.