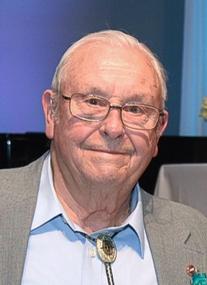 Robert E. “Bob” Osborn, 94, of Morristown, passed away Saturday, April 30, 2022, at his home. He was born November 4, 1927, in Hanover Township, Shelby County, Indiana, the son of the late Martin D. and Doris Irene (Darling) Osborn. On December 31, 1948, he married Ruth Ellen Logan, and she preceded him in death on May 19, 2017. Bob is survived by his four daughters, Nancy Irene Waybright and husband, Roger, of Ranson, West Virginia, Rebecca Ann “Becki” Brown and husband, Craig, of Shelbyville, Deborah Kay “Deb” Reed and husband, Keith, of Greensburg, and Rena Jo Reuter and husband, Matt, of Morristown; grandchildren, Marc Waybright, Jennifer Burley, Kathy Dougherty, Kim Spindler, Corey Brown, Logen Adkins, Britney Plymate, Justin Beckner and Jessica Berry; 25 great-grandchildren; and one great-great-grandson and one on the way. Bob graduated in 1946 from Morristown High School. He was a veteran of the U.S. Navy, serving from April 1946 to February 1948. Bob was a member of the Morristown Christian Church, where he served as an elder and Sunday school teacher. He had led Bible study at Morristown Manor. Bob had also served in the missions. He was a farmer and had previously co-owned, Morristown Building Supply. Bob was the former manager for Ralph Distribution in Indianapolis and Capital Building Supply and Warehouse, Radio Equipment in Indianapolis, and Sales Cabinet. He was also the assistant construction manager at GV Ginger. Visitation will be from 4 to 8 p.m. Wednesday, May 4, 2022, at Freeman Family Funeral Homes and Crematory, Frazier Chapel, 124 E. North St. in Morristown. Funeral services will be at 10 a.m. Thursday, May 5, 2022, at the funeral home, with Ted Hagel officiating. Interment will be at Arlington East Hill Cemetery in Arlington, with military rites conducted by the local military committee. Memorial contributions may be made to FAME, 4545 Southeastern Avenue, Indianapolis, IN 46203 or American Indian Christian Mission, 924 Mission Lane, Show Low, Arizona 85901. Online condolences may be shared with Bob’s family at www.freemanfamilyfuneralhomes.com.
To order memorial trees or send flowers to the family in memory of Robert E. "Bob" Osborn, please visit our flower store.